Robin Uthappa and Mayank Agarwal scored 148 and 118 respectively as defending champions Karnataka posted 358-3 on Day 1 of their Ranji Trophy tie against Delhi. 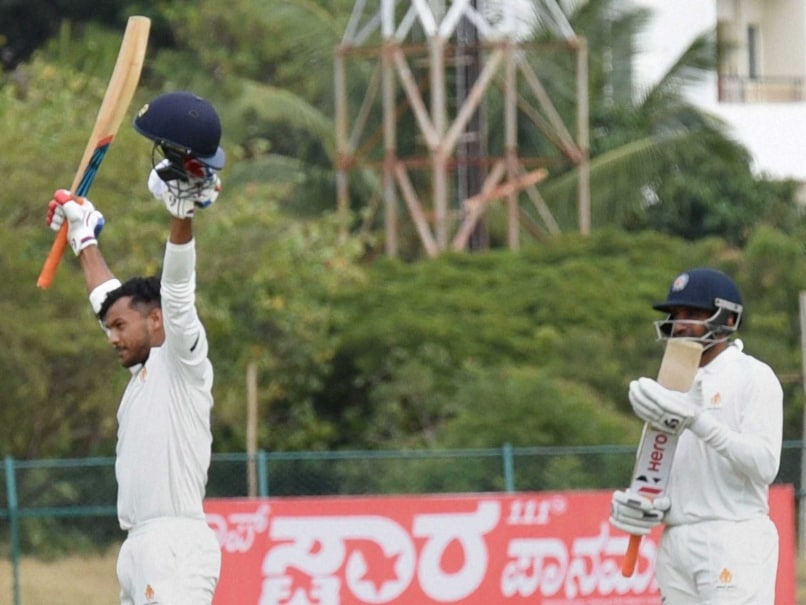 Karnataka's Mayank Aggrawal (left) celebrates his century along with Robin Uthappa during a Ranji trophy match against Delhi in Hubli.© PTI

Robin Uthappa flayed Delhi bowlers with disdain hitting part-time off-spinner Dhruv Shorey for 32 in a single over as his third successive hundred took Karnataka to a comfortable 358 for three against Delhi in the Group A league encounter of the Ranji Trophy. (Read More in Cricket)

Courtesy Uthappa's 141-ball-148 that had 16 boundaries and six maximums along Mayank Agarwal's (118) maiden first-class hundred, the defending champions are in driver's seat at the end of the opening day.

The duo added 236 runs for the second wicket stand with Agarwal hitting 19 boundaries off 209 balls.

When the stumps were drawn, Manish Pandey and Karun Nair were batting on 31 runs each, with help of four and two boundaries, respectively. They stitched an unbeaten 61-run stand for the fourth wicket.

Uthappa, who is riding high on his form, hammered his third consecutive century after his scores of 160 and 148 against Rajasthan and Odisha in the previous games.

Sent into bat, Karnataka lost their first wicket of Ravikumar Samarth at 47 when he Pawan Suyal bowled him with an incoming delivery.

Uthappa joined Agarwal, and both started making runs at a quick pace of 3.43 runs per over and took Karnataka total to 120 for one at lunch.

In the post lunch session, Karnataka came out with renewed energy, and in just four overs Uthappa and Agarwal cracked 21 runs with Uthappa hitting three more boundaries and Agarwal helping himself with a boundary.

Just at the stroke of tea, Uthappa crushed Shorey for 32 runs in his very first over by smashing four huge sixes, taking his score from 102 to unbeaten 134 in a jiffy.

Comments
Topics mentioned in this article
Robin Uthappa Mayank Agarwal Manish Pandey Karun Nair Pawan Suyal KAR DEL Cricket
Get the latest updates on IPL 2021, check out the IPL 2021 Schedule and Indian Premier League Live Score . Like us on Facebook or follow us on Twitter for more sports updates. You can also download the NDTV Cricket app for Android or iOS.