Mumbai earned three points on the basis of 144-run first innings lead after bundling out Railways for 426 in their Group A Ranji Trophy match that ended in a draw on fourth and final day here on Monday. 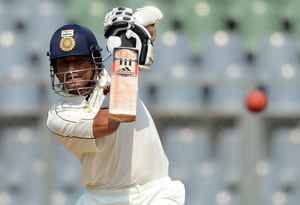 Mumbai earned three points on the basis of 144-run first innings lead after bundling out Railways for 426 in their Group A Ranji Trophy match that ended in a draw on fourth and final day here on Monday.

Having taken a massive lead over the visitors, Mumbai went on to pile up 230 for five in their second innings.

Mumbai had scored 570 all out in their first innings.

Resuming at 380 for eight, Railways had a tough task of avoiding the follow on and the overnight batsmen --Krishnakant Upadhyay (45) and Anureet Singh (30 not out) --shared a 74-run stand for the ninth wicket to overcome the challenge.

Mumbai's bowling attack without Zaheer Khan, who had left mid-way during one of his overs due to cramps on Saturday, seemed lacklustre earlier on.

However, Railways batsmen failed to sustain for long and fell for a little over 420-run mark within 40 minutes of play in the morning session and trailed Mumbai by 144 runs.

Dhawal Kulkarni claimed both the wickets with Upadhyay and Hardik Rathore (0) in his consecutive overs. In Mumbai's second innings, first innings centurion, Ajinkya Rahane, hit a quickfire 81-ball 84 studded seven fours and two sixes, while Kaustubh Pawar scored 85 off 173 balls. The duo put up a 125-run stand for the third wicket.

Sachin Tendulkar, who scored a strokeful 137 off 136 balls in the first innings, did not come out to bat in the second innings. He had earlier batted at no. 5 but Abhishek Nayar was sent at that position.

Zaheer, who has been included in India squad for the first two Tests against England, was seen driving into the stadium after the Railways innings was finished. He was later seen warming up at the boundary line, 20 minutes prior to lunch.

During lunch, he practiced at the unused wicket and rolled his arm over to bowl a few deliveries at the stump for nearly 15 minutes.

A team source later said that Zaheer was "resting as a precaution" but will not be reprimanded for coming late.

After the day's play, Rahane admitted that he was disappointed at not having scored the ton but said he was happy with his batting efforts.

On his preparation for the England series, the Mumbaikar said, "I have got three good innings and I am quite high on confidence, so I am feeling good...I am not thinking about Test matches but just want to prepare myself and see what happens."

Rahane batted at number 3 in both the innings and said he can bat at any position.

"If you are playing international cricket, you need to be mentally prepared. The batting order can change according to the situation," he said.

On Zaheer's injury, he said, "He is completely alright. He is fine."