Rameez Shahzad managed to take a blinder at long-off to send back George Munsey in the third play off of T20 World Cup qualifier. 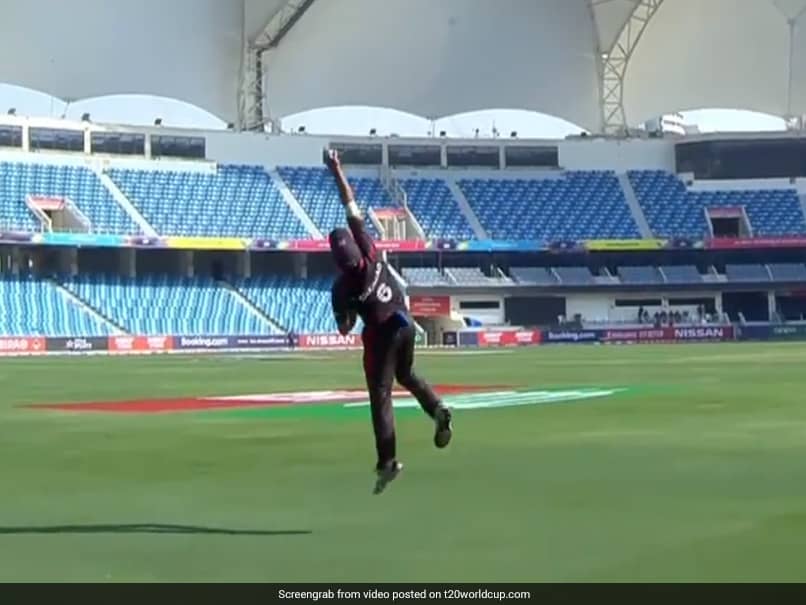 Rameez Shahzad, United Arab Emirates' (UAE) top-order batsman, took a one-handed blinder to get rid of George Munsey of Scotland in the third play off of Twenty20 (T20) World Cup qualifier on Wednesday. However, Rameez's effort at the fence could not save UAE from defeat as they lost the match by 90 runs as Scotland marched into the final of the tournament. Scotland won the decided and opted to bat, George Munsey along with his captain Kyle Coetzer put on 87 runs for the first wicket that set up the platform for a big total. Late flourish from Richie Berrington, who scored 48 off just 18 deliveries, helped Scotland put on 198 runs on the board.

In the 14th over, Ahmed Raza tossed one up to Munsey and the left-hander tried to clear the fielder at long-off but he found Rameez Shahzad, who grabbed a stunning catch to dismiss the opening batsman.

@nassercricket: "NOOO WAY, YOU CANNOT DO THAT!"

The catch was similar to that of what Ben Stokes had pulled off in World Cup 2019 against South Africa. The International Cricket Council (ICC) had praised Ben Stokes in a tweet, saying: "Ben Stokes has just taken one of the greatest catches you will EVER see!"

Chasing 199 for the win, UAE were bowled out for 108 in the 19th over. After sufferring a 90-run loss, UAE missed out on qualifying for the T20 World Cup, to be played next year.

With the win, Scotland qualified for the showpiece event. Earlier, Namibia, Papua New Guinea, Ireland and the Netherlands booked a place in the T20 World Cup.

UAE had lost to the Netherlands in the first play-off on Tuesday.

United Arab Emirates Cricket
Get the latest updates on India vs Australia Series, check out the India vs Australia Schedule for 2020-21 and Ind vs Aus live score . Like us on Facebook or follow us on Twitter for more sports updates. You can also download the NDTV Cricket app for Android or iOS.