Namibia will appear at the T20 World Cup for the first time after beating Oman in Dubai, joining the Netherlands on Tuesday in qualifying for next year's tournament. 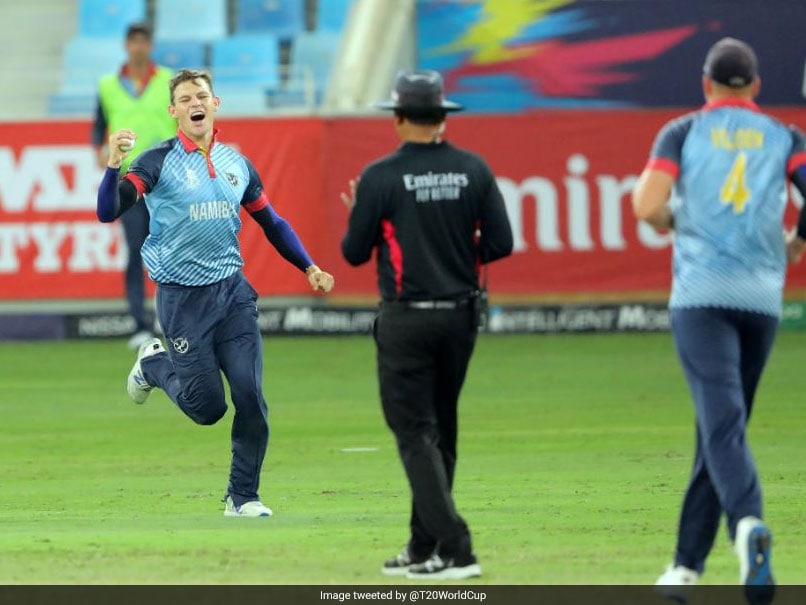 Namibia will appear at the T20 World Cup for the first time after beating Oman in Dubai, joining the Netherlands on Tuesday in qualifying for next year's tournament. All-rounder JJ Smit blasted 59 off 25 balls as Namibia beat Oman by 54 runs to progress to the eight-team first round of the World Cup in Australia in October 2020. Namibia posted 161/7 after choosing to bat, with Smit smacking five sixes in a match-winning innings following a steady 45 from Craig Williams.

Oman, who took part in the 2016 T20 World Cup, began well in reply as Khawar Ali and Aqib Ilyas put on 57 for the second wicket after Jatinder Singh was removed for a first-ball duck.

Left-arm spinner Bernard Scholtz trapped Ilyas (18) in front and then had Ali (41) stumped as Oman staggered to 64 for 4 before folding meekly.

Scholtz finished with 3/14 while Namibia captain Gerhard Erasmus took three wickets of his own, including that of opposing skipper Zeeshan Maqsood (2), as Oman slumped to 107 all out.

"We got so many messages from people back home believing in us, and we did it finally," said Smit.

"I'm relieved. We've been on the wrong side of many of these tournaments."

Erasmus hopes Namibia's qualification for the global showpiece can help spark wider interest in the game back home.

"We want more people playing cricket in Namibia and we want to spread the game and if they see us do well on the world stage then it gives them an incentive to play and think of a career," said Erasmus.

Namibia, who lost all six of their games at the 50-over World Cup in 2003, meet Papua New Guinea in the competition semi-finals, while Oman can still qualify if they beat Hong Kong in a playoff.

Earlier, the Netherlands punched their ticket to Australia after thrashing United Arab Emirates by eight wickets.

UAE, who started the tournament with victory over Ireland, could only muster 80/9 in their 20 overs which the Dutch knocked off with 29 balls remaining.

The Netherlands face already qualified Ireland in the semi-finals, while UAE have one last chance to reach the tournament when they face Scotland in a playoff on Wednesday.

UAE won the toss and chose to bat, but were quickly in trouble as Rohan Mustafa fell to Fred Klaassen in the first over. Things turned from bad to worse as UAE lost their first five wickets for just nine runs.

Waheed Ahmed and Mohammad Boota went some way toward repairing the damage with a sixth-wicket partnership of 35 before both fell in the same over to Johannesburg-born Brandon Glover, whose 4/12 earned him the player of the match award.

Ahmed Raza top-scored with 22 from 24 balls, but a target of 81 was never likely to stretch the Dutch.

Max O'Dowd fell early but Ben Cooper, with 41 not out, guided the Dutch to victory.

"We have still not played at 100 per cent, bowling a team out for 80 and chasing it down with just two wickets is obviously close to 100 per cent.

"But we can still do better and the semi-final against Ireland is a good chance to do that."

Netherlands Cricket
Get the latest updates on T20 World Cup, check out the T20 World Cup Schedule and Live Score . Like us on Facebook or follow us on Twitter for more sports updates. You can also download the NDTV Cricket app for Android or iOS.