Quinton de Kock is not likely to face any sanctions over the run out of Fakhar Zaman during the second ODI between South Africa and Pakistan, despite claims of de Kock violating the 'fake fielding' law. 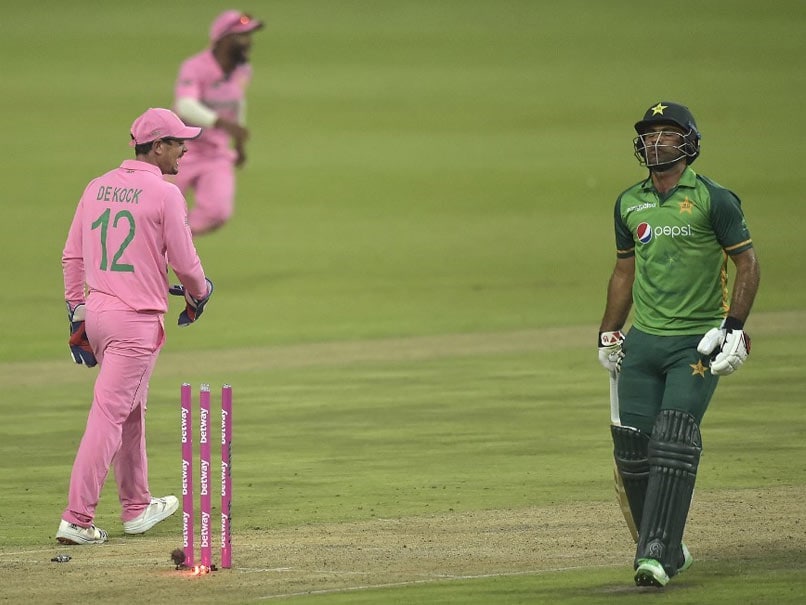 Quinton de Kock is unlikely to face any sanctions for the run out of Fakhar Zaman in 2nd ODI.© AFP

South African wicketkeeper Quinton de Kock is unlikely to face any sanction over the run out of Fakhar Zaman during the Proteas' 17-run win in the second ODI, according to reports. After reviewing footage of the incident, match officials are believed to have come to the conclusion that de Kock was not in breach of the law on fielders deceiving batsmen. In the last over of the match, with Pakistan still needing 30 to win, de Kock seemingly gestured for South African Aiden Markram to throw to the bowler's end, where Haris Rauf was heading.

Fakhar, who had struck an outstanding 193, looked behind him, away from the direction of the fielder, as he was running towards the wicketkeeper and was surprised when Markram's throw hit the stumps at that end.

Social media immediately went into overdrive with cries that de Kock had violated the law on fake fielding which states that "it is unfair for any fielder wilfully to attempt, by word or action, to distract, deceive or obstruct either batsman after the striker has received the ball".

Fakhar admitted after the match that he had been taken by surprise but did not attempt to deflect blame for the dismissal on to cheating by the South African wicketkeeper.

"I was looking at Haris Rauf because I thought the run-out would be at his end. It was my own fault," he said at the post-match press conference.

Officials are understood to have deemed that de Kock's actions were not a trick and that he was indicating for the throw to go to the bowler's end.

South African fielder Tabraiz Shamsi tweeted on Monday that de Kock was calling for a fielder to back up the throw at the non-striker's end.

"QDK was NOT speaking 2 or pointing at the batsman, he was asking a fielder to back up at the non strikers end," tweeted Shamsi.

"Not Quinnys fault the batman turned around 2 see instead of completing the run safely which he should have done."

Fakhar Zaman South Africa vs Pakistan, 2nd ODI Cricket
Get the latest updates on ICC T20 Worldcup 2022 and CWG 2022 check out the Schedule, Live Score and Medals Tally. Like us on Facebook or follow us on Twitter for more sports updates. You can also download the NDTV Cricket app for Android or iOS.