"He Was Asking A Fielder To Back Up": Tabraiz Shamsi Defends Quinton De Kock's Run Out Of Fakhar Zaman

South Africa spinner Tabraiz Shamsi, who played in the second ODI against Pakistan on Sunday, said Quinton de Kock was asking for a fielder to back up the ball at the non-striker's end when Fakhar Zaman was run out in the last over of a close contest. 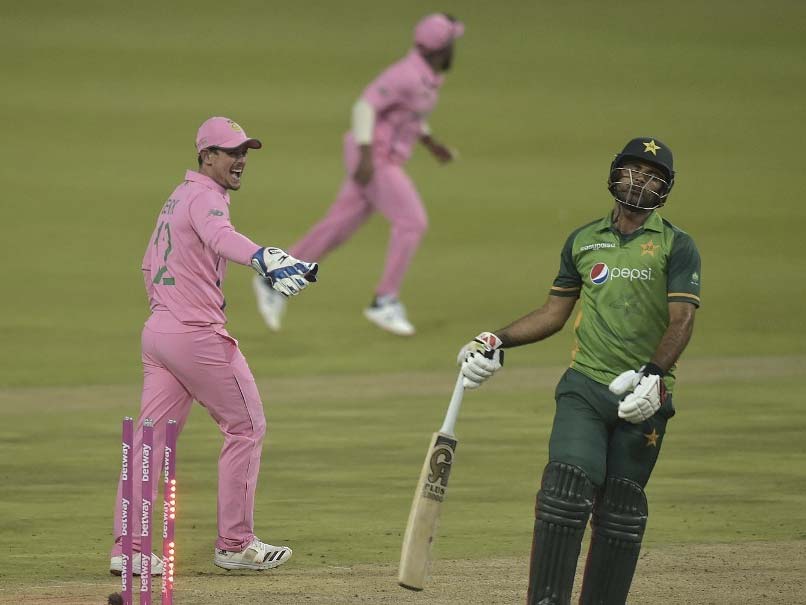 Fakhar Zaman's knock of 193 was in vain as Pakistan lost to South Africa by 17 runs.© AFP

While many lashed out at Quinton de Kock for his role in the controversial run-out of Pakistan opening batsman Fakhar Zaman in the second ODI on Sunday, South Africa spinner Tabraiz Shamsi on Monday defended the wicket-keeper. Zaman's valiant 193-run knock was ended off the first ball of the final over as a direct hit from Aiden Markram from long-off caught him short of his crease. The run-out triggered a debate as wicket-keeper de Kock appeared to gesture that the throw from Markram might be going to the non-striker's end.

Looking at this gesture, Zaman slowed down as he thought the throw would not be coming at his end, but Markram's throw took him by surprise.

Shamsi said de Kock was asking the fielder to back up at the non-striker's end. The spinner also pointed out Zaman's fault as the batsman had turned around to see the ball instead of completing the run.

"Just 2 clarify. QDK was NOT speaking 2 or pointing at the batsman, he was asking a fielder to back up at the non strikers end," Shamsi tweeted.

"Not Quinnys fault the batman turned around 2 see instead of completing the run safely which he should have done. Stop the hate n Leave QDK alone," he added.

After the incident Marylebone Cricket Club (MCC) took to Twitter to explain the law, saying it is up to the umpire to decide whether the act of the fielder to distract the batter was willful or not.

"Law 41.5.1 states: "It is unfair for any fielder wilfully to attempt, by word or action, to distract, deceive or obstruct either batsman after the striker has received the ball,"" MCC tweeted.

In another tweet, MCC said: "The Law is clear, with the offence being an ATTEMPT to deceive, rather than the batsman actually being deceived. It's up to the umpires to decide if there was such an attempt. If so, then it's Not out, 5 Penalty runs + the 2 they ran, and batsmen choose who faces next ball."

Zaman had also said that de Kock made no mistake and it was only his fault that he was found short of the crease.

"The fault was mine as I was too busy looking out for Haris Rauf at the other end as I felt he'd started off a little late from his crease, so I thought he was in trouble. The rest is up to the match referee, but I don't think it's Quinton's fault," ESPNcricinfo quoted Zaman as saying.

Fakhar Zaman South Africa vs Pakistan, 2nd ODI Cricket
Get the latest updates on Fifa Worldcup 2022 and check out  Fifa World Cup Schedule, Stats and Live Cricket Score. Like us on Facebook or follow us on Twitter for more sports updates. You can also download the NDTV Cricket app for Android or iOS.