Peshawar Zalmi defeated Quetta Gladiators in the first eliminator by one run with a last-ball thriller in Lahore as the third edition of the Pakistan Super League (PSL) returned home on Tuesday. 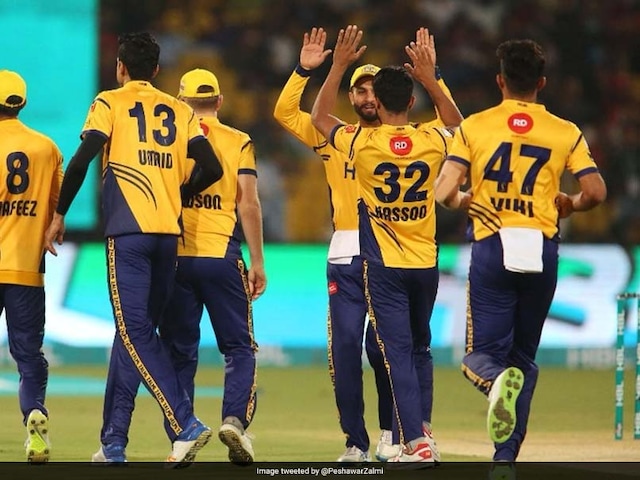 Peshawar Zalmi defeated Quetta Gladiators in the first eliminator by one run.© Twitter

Peshawar Zalmi defeated Quetta Gladiators by one run in the first eliminator with a last-ball thriller in Lahore as the third edition of the Pakistan Super League (PSL) returned home on Tuesday. The first 31 matches of the league were held in Dubai and Sharjah. Quetta, chasing 158 for victory, needed 25 in the last over with Anwar Ali smashing three sixes and a boundary to keep the target down to three, but his partner Mir Hamza was run out as the batsmen tried a second run. Peshawar Zalmi notched up 157 all out in 20 overs with former England all-rounder Liam Dawson scoring a 35-ball 62 with six boundaries and four sixes. Pakistan paceman Rahat Ali took 4-16.

Peshawar will now take on Karachi Kings in the second eliminator in Lahore on Wednesday and the winner of that match will face Islamabad United in the final in Karachi on Sunday.

The Pakistan Cricket Board has gradually revived international cricket in the country as improved security made it possible to host the final in Lahore in March last year.

That was followed by a three-match Twenty20 series against a World XI -- comprising of players from seven countries -- in September plus a single Twenty20 match against Sri Lanka a month later.

International cricket was suspended in Pakistan after terrorist attacks on the Sri Lankan team bus in Lahore in March 2009.

But Pakistan did host five limited-over matches against Zimbabwe in 2015.

Quetta was weakened by the withdrawal of its key foreign players Kevin Pietersen (England), Shane Watson and Ben Laughlin (both Australia) who had security concerns about playing in Pakistan.