Pavel Florin took one wicket and gave away just 31 runs in his eight overs in the exhibition game in Australia. 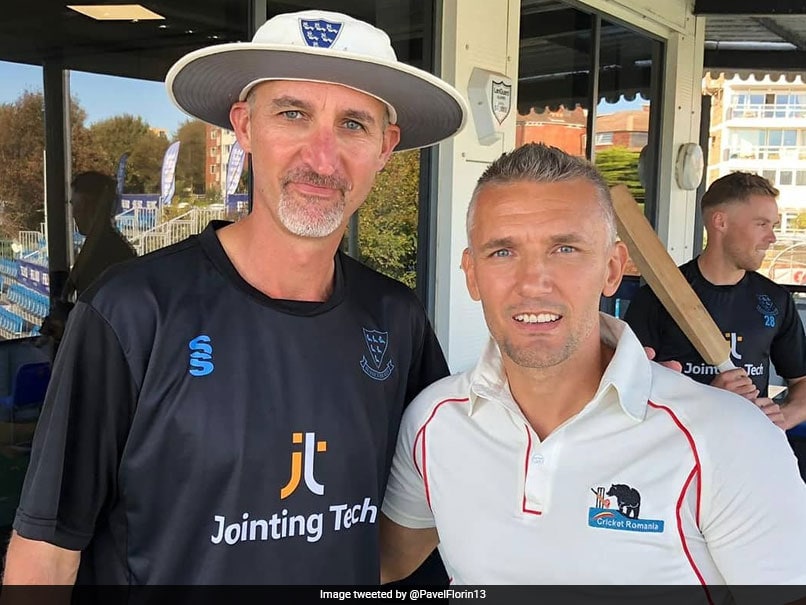 Pavel Florin, the Romanian cricketer who became an internet sensation for his bowling action and love for the game, shared a video of his wicket from his first match in Australia. On Sunday, he took the field for Surrey Hill Cricket Club against Monash University in an exhibition match. The club had responded to the videos of his unique action and subsequent interview, where he spoke about his love for the game by inviting him to come and play for them in Australia.

In the video, Florin bowls -- with the same distinct bowling technique that got him cult status on the internet -- a slow, loopy delivery, that the batsman tries to reverse-sweep. But, to the joy of the Romanian bowler and his teammates, the batsman misses, and is trapped LBW.

The moment the umpire raises his finger elicits a passionate celebration from the Romanian, who punches the air several times while letting out a celebratory shout. His teammates then run in and surround him in celebration.

"My first wicket in Australia!!" Florin tweeted along with the video. "Unfortunately we lost to 2 wickets after a close match," he added.

He mentioned his bowling figures, which read 1-31 in eight overs. He also wrote that it was the first time he bowled a maiden over - he bowled three of them in total in the match - and the first time that he played 45 overs.

My first wicket in Australia!!
Unfortunately we lost to 2 wickets after a close match
My score: batting 3 runs
Bowling 31 runs in 8 over 1 wicket and 1 catch 3 maiden overs
The first time when i bowling maiden over
The firs time when i play 45 over@AnnieChave is your wicket :) pic.twitter.com/vllYmwua5m

Fans lavished praise on Florin after his impressive performance in the match.

"Congratulations! Your whole team enjoyed that wicket! 1/31 from 8 overs are good figures!" one fan wrote.

"Pavel the boss it is just a Start More is on the way to come from Pavel Florin," another tweeted.

Pavel Florin rose to popularity when a video of his bowling action in the European T10 Cricket League went viral.

Many came out in support of Pavel Florin and his love for the game -- he started playing cricket aged 32, and is still going strong at 40. However, he was also in for some trolling, with people taking the mickey out of the Romanian for his unique bowling technique.

However, Florin was unperturbed.

"Maybe someone says my bowling is not beautiful or not effective but I don't care, because I love cricket," he had said in a video after his bowling action went viral.

Comments
Topics mentioned in this article
Pavel Florin Cricket
Get the latest updates on ICC T20 Worldcup 2022, check out the Schedule and Live Score. Like us on Facebook or follow us on Twitter for more sports updates. You can also download the NDTV Cricket app for Android or iOS.