Nasir Jamshed was jailed for 17 months on Friday after pleading guilty to conspiracy to bribe fellow cricketers as part of a Twenty20 spot-fixing scheme. 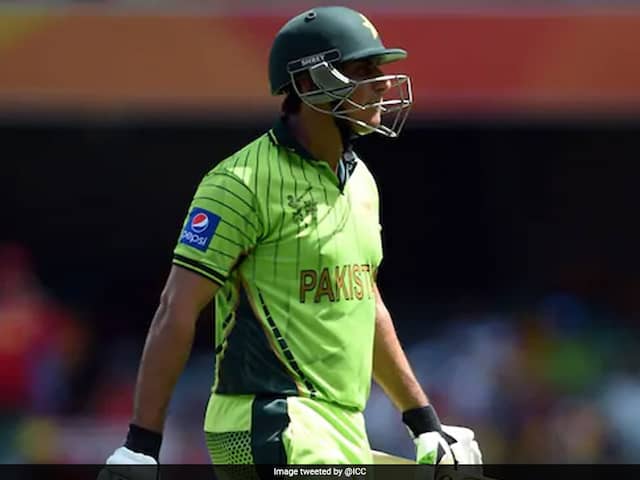 Nasir Jamshed was arrested alongside two other men in February 2019.© AFP

Former Pakistan batsman Nasir Jamshed was jailed for 17 months on Friday after pleading guilty to conspiracy to bribe fellow cricketers as part of a Twenty20 spot-fixing scheme. Jamshed, 30, was arrested alongside two other men -- Yousef Anwar, 36, and Mohammed Ijaz, 34 -- last February as part of a National Crime Agency probe into alleged spot-fixing. Anwar, from Hayes, west London, played the most prominent role in the plan, and was jailed for three years and four months. Ijaz, from Sheffield, northern England, was sentenced to two years and six months in custody.

All three admitted their roles in the conspiracy at a previous hearing.

Sentencing them all at Manchester Crown Court in northwest England, judge Richard Mansell said Anwar and Ijaz had engaged in "sophisticated and organised criminal activity".

Jamshed was "vulnerable to succumbing to the temptation of financial reward", he added.

"Corruption of this kind has sadly been taking place in the game of cricket for a very long time," he told the court.

"If anything it has become worse due to the proliferation in the last decade of hugely popular televised international T20 tournaments in all the major cricketing nations, combined with a huge increase in online gambling.

"What makes cricket, and specifically these T20 tournaments in Bangladesh, Pakistan and India, so vulnerable to corrupt practices, is the existence of a huge, largely unregulated online betting industry in the Indian sub-continent."

An undercover police officer infiltrated the network by posing as a member of a corrupt betting syndicate.

His work led to an attempted fix in the Bangladesh Premier League (BPL) towards the end of 2016 being revealed, as well as an actual fix in the Pakistan Super League (PSL) in February 2017.

Jamshed was the target of bribery in the Bangladesh "two dot ball" plan which was eventually called off.

He then turned perpetrator as a go-between and encouraged other players to spot-fix at a PSL fixture between Islamabad United and Peshawar Zalmi in Dubai on February 9.

The court was told a corrupt betting syndicate could make hundreds of thousands of pounds from such spot-fixes by placing fraudulent in-play bets, safe in the knowledge they were almost certain to win.

Jamshed, who made more than 60 appearances for his country, denied the PSL bribery offence but changed his plea to guilty after his trial opened in December.

Last year, Jamshed was banned from playing cricket for 10 years following an investigation by the Pakistan Cricket Board's anti-corruption unit.

Pakistan Cricket Team Nasir Jamshed Cricket
Get the latest updates on IPL 2020, check out the IPL Schedule for 2020 and Indian Premier League (IPL) Cricket live score . Like us on Facebook or follow us on Twitter for more sports updates. You can also download the NDTV Cricket app for Android or iOS.