Mohammad Wasim Jnr has been named as Naseem Shah's replacement for the U-19 World Cup. 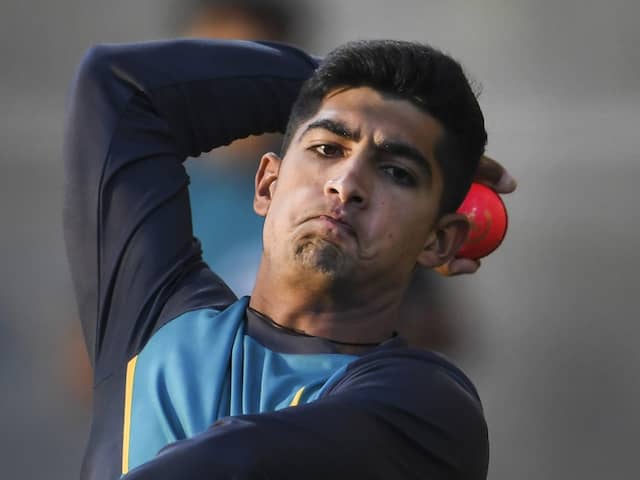 Naseem Shah has been withdrawn from Pakistan's squad for the upcoming U-19 World Cup.© AFP

Sixteen-year-old Pakistan pacer Naseem Shah has been withdrawn from the upcoming U19 World Cup scheduled to be played in South Africa from January 17 to February 9. In an official statement, the Pakistan Cricket Board (PCB) announced that Mohammad Wasim Jnr has been named as Shah's replacement. The board said that it has taken a pragmatic approach and decided to withdraw Shah who has already made an impact in senior men's cricket, having played three Tests with a five-wicket haul also to his name.

"The ICC U19 Cricket World Cup is a stepping stone for future stars and a platform for budding youngsters to graduate to international cricket. Naseem has recently broken that glass ceiling and has established his credentials as an international cricketer," PCB Chief Executive Wasim Khan said.

"This should not deter Pakistan's chances at next year's ICC U19 Cricket World Cup as the selectors have picked a side that is experienced and bubbling with confidence to perform strongly.

He further said that right-arm pacer will remain in Pakistan and continue to work on his skills under bowling coach Waqar Younis. Furthermore, he will remain available for the home series against Bangladesh.

Shah made his international debut for Pakistan's senior team in Australia in November last year.

Pakistan, the 2004 and 2006 champions and three-time runners-up of the U19 World Cup, are placed in Group C of the 16-team event and will play Scotland in their opening match on January 19.

Pakistan U19 Naseem Shah Cricket
Get the latest Cricket news, check out the India cricket schedule, Cricket live score . Like us on Facebook or follow us on Twitter for more sports updates. You can also download the NDTV Cricket app for Android or iOS.