Heavy rain and bad light hit the second day of the historic Test between Pakistan and Sri Lanka in Rawalpindi on Thursday. 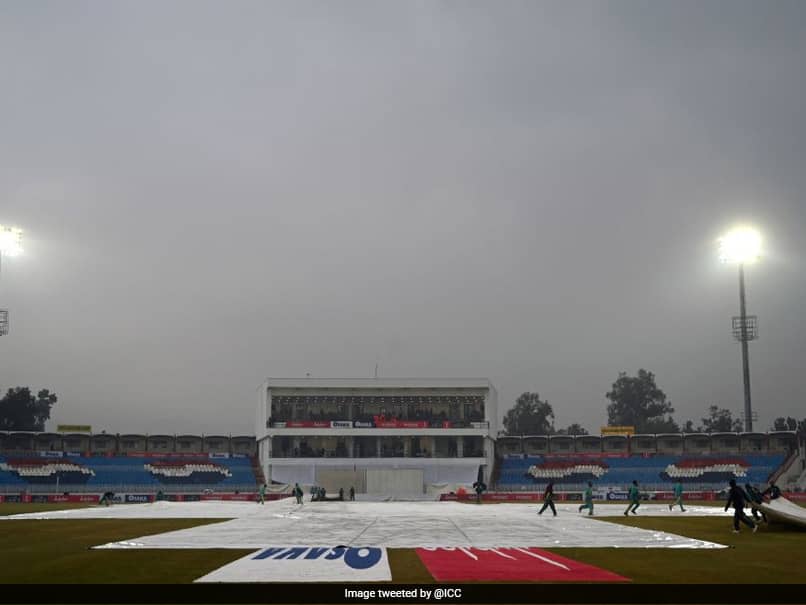 Only 18.2 overs were possible on Day 2 of the first Test in Rawalpindi.© Twitter

Heavy rain and bad light hit the second day of the historic Test between Pakistan and Sri Lanka in Rawalpindi on Thursday, Pakistan's first home Test since a deadly attack in 2009. Sri Lanka, resuming at 220-5, had progressed to 225-5 in 7.5 overs when heavy rain in the morning forced the teams to have early lunch. Play was stopped for two hours and 43 minutes but when it resumed only 10 overs were possible with Sri Lanka losing Niroshan Dickwella for 33 before bad light accompanied by rain forced an early call-off at 3:30 pm (1030 GMT).

At the close Sri Lanka were 263-6 with Dhananjaya de Silva unbeaten on 72 and Dilruwan Perera not out on two.

The stop-start play left both teams frustrated as well as 2,000 fans who had come to watch the revival of Test cricket in Pakistan.

On the next ball de Silva completed his half-century with two runs off Naseem, who with 2-65 was the pick of Pakistan's bowlers.

The Test is the first in Pakistan since a militant attack on the Sri Lankan team bus killed eight people in March 2009, leading to the suspension of international cricket in the country as foreign teams refused to visit over security fears.

With improved security, Pakistan hosted Zimbabwe, a World XI, West Indies and Sri Lanka in the last four years, but only for limited over matches.

Sri Lanka only agreed to tour after completing a limited over tour (three one-day internationals and as many Twenty20s) in September-October this year under tight security arrangements.

Shaheen Afridi Cricket
Get the latest updates on India vs England Series, India vs England , live score and IPL 2021 Auction . Like us on Facebook or follow us on Twitter for more sports updates. You can also download the NDTV Cricket app for Android or iOS.