New Zealand's last away series win against Pakistan was a 1-0 victory in matches played in Pakistan in 1969. 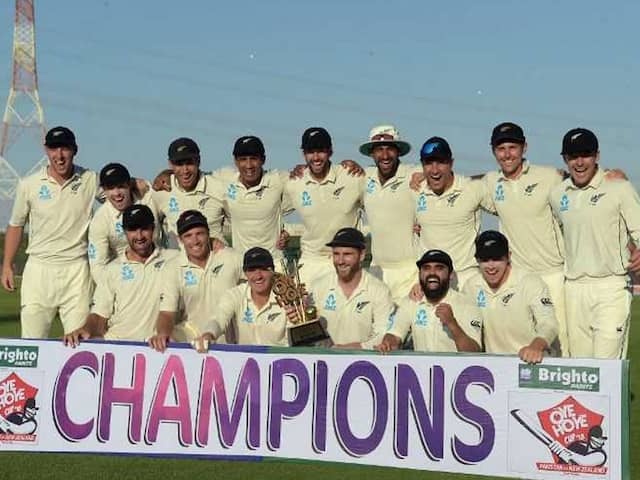 New Zealand beat Pakistan in the third and final Test to clinch the series 2-1.© AFP

Debutant Will Somerville grabbed three key wickets to guide New Zealand to their first away series win over Pakistan in 49 years with a crushing 123-run win in the third and final Test on Friday. The off-spinner took 3-52 and was aided by fellow spinner Ajaz Patel's 3-42 as Pakistan came up well short after being set a daunting 280-run target in 79 overs. They crumbled to 156 in 56.1 overs on a weary pitch at Sheikh Zayed Stadium in Abu Dhabi. The victory gave New Zealand a 2-1 series win after they had taken the first Test by a narrow four-run margin at the same venue. Pakistan bounced back with an innings and 16-run win in the second Test in Dubai.

New Zealand's last away series win against Pakistan was a 1-0 victory in matches played in Pakistan in 1969.

It was the Black Caps' fifth Test series win in their last six played since November 2016. They beat Pakistan, Bangladesh, the West Indies and England -- all at home -- with the single loss came against South Africa.

Somerville, who took 4-75 in the first innings to finish with seven wickets in the match, broke a stubborn 43-run sixth-wicket stand between top scorer Babar Azam (51) and skipper Sarfraz Ahmed, who made 28.

Patel ended Azam's 114-ball resistance before getting the last wicket when he dismissed Hasan Ali for four, sparking celebrations among the New Zealand players.

Pakistan were again let down by sloppy batting.

They were off to a disastrous start when Mohammad Hafeez, in his last innings before he retires from Test cricket, was bowled by fast bowler Tim Southee for eight.

Somerville had Haris Sohail caught off a tentative push in the slip with his third ball of the first over for nine and next ball had first innings centurion Asad Shafiq caught behind off the glove.

In the last over before lunch Imam-ul-Haq, watching four wickets fell at the other end, gave an easy catch to forward short-leg off Patel for 22.

Earlier, New Zealand declared their second innings on 353-7 after some 45 minutes of batting with Henry Nicholls remaining unbeaten on 126 and Kane Williamson dismissed at his overnight score of 139.

That 212-run stand between Williamson which brought New Zealand back into the game on Thursday, was finally broken with the very first ball of the day.

Medium pacer Hasan Ali trapped Williamson leg before and even a review did not prolong the New Zealand skipper's innings.

But his 283-ball knock, containing 13 boundaries, turned the match.

Nicholls took a sharp single to complete his third Test hundred and finished with 12 hits to the ropes during his 266-ball knock.

Kane Williamson Pakistan vs New Zealand, 3rd Test Cricket
Get the latest Cricket news, check out the India cricket schedule, Cricket live score . Like us on Facebook or follow us on Twitter for more sports updates. You can also download the NDTV Cricket app for Android or iOS.