Hasan Ali took his maiden five-wicket haul while Yasir Shah his 14th five-wicket feat in an innings as New Zealand collapsed from 220-4 to 249 all out. 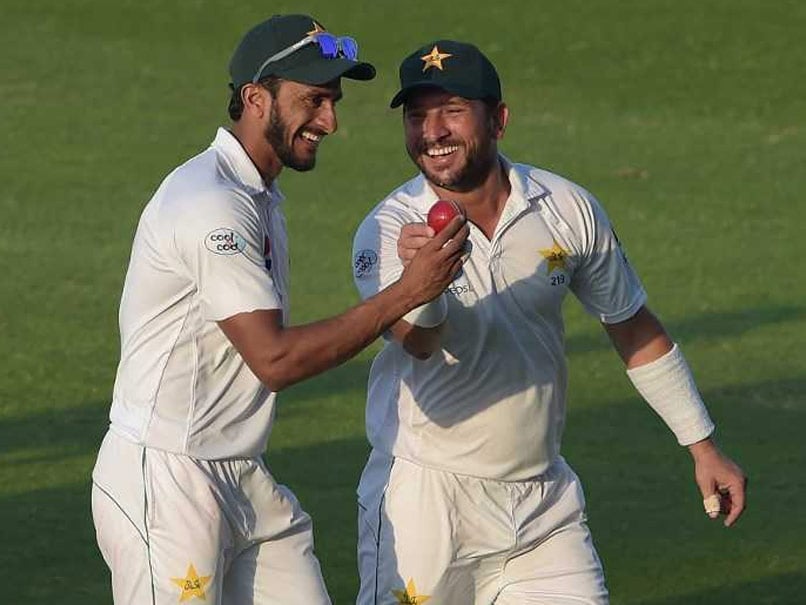 Hasan Ali and Yasir Shah starred with the ball to put Pakistan in command of the 1st Test vs New Zealand.© AFP

Medium pacer Hasan Ali and leg-spinner Yasir Shah took five wickets apiece to set Pakistan on the victory path on the third day of the first Test against New Zealand in Abu Dhabi on Sunday. Hasan took his maiden five-wicket haul with 5-45 while Yasir finished with 5-110 -- his 14th five-wicket feat in an innings -- as New Zealand collapsed from 220-4 to 249 all out soon after tea. That left Pakistan with 176 to win the Test and at close they were 37 for no loss with Imam-ul-Haq on 25 not out and Mohammad Hafeez unbeaten on eight, needing another 139 to win with all 10 wickets in hand and two days to play.

With the Sheikh Zayed Stadium pitch not worrisome for batting Pakistan have high hopes of enforcing a 1-0 lead in the three-match series while New Zealand can take heart from the fact that Pakistan lost a Test here against Sri Lanka by 21 runs after being set 136 to win last year.

Bradley-John Watling with 59 and Henry Nicholls with 55 had defied Pakistan in the post-lunch session with a fighting stand of 112 for the fifth wicket but Yasir took four wickets off just 15 balls to bring his team back into contention.

Pakistan took the second new ball with the total at 201-4 soon after tea and Yasir had Nicholls caught beautifully by wicketkeeper Sarfraz Ahmed and then in his next over trapped Coiln de Grandhomme leg-before for three.

An over later, Yasir ended Watling's 145-ball defiance with a leg-before and then bowled Neil Wagner for nought. Watling had five boundaries in his knock.

Hasan then wrapped up the innings by bowling Ish Sodhi for 18 and Trent Boult caught off a miscued drive for nought to improve on his previous best figures of 4-51 against England at Lord's in May this year.

New Zealand were in danger of losing the Test today after three quick wickets fell in the space of just 22 runs in the first session with Hasan taking two in the same over.

But Watling survived a leg-before decision on review after umpire Bruce Oxenford raised his finger off Bilal Asif for 15. Watling took full advantage of the reprieve and added 67 in the second session without losing a wicket.

It was Hasan who brought Pakistan back in the first session.

Hasan, who had opener Tom Latham yesterday, trapped a dangerous looking Taylor leg-before with a sharp incoming delivery for 19 and then had Jeet Raval caught behind by wicketkeeper Sarfraz Ahmed for 46.

Raval had added 86 for the second wicket with Kane Williamson who made 37. Raval hit five boundaries in his 120-ball knock.

Resuming at 56-1 New Zealand had pinned hopes on their skipper Williamson. But it was Raval who smashed two boundaries and then took a single off Mohammad Abbas to take New Zealand into the lead.

But just 12 runs into the lead Williamson was bowled by leg-spinner Yasir Shah to a ball that beat the batsman's push and removed the bail.

Yasir Shah Pakistan vs New Zealand, 1st Test Cricket
Get the latest updates on Fifa Worldcup 2022 and check out  Fifa World Cup Schedule, Stats and Live Cricket Score. Like us on Facebook or follow us on Twitter for more sports updates. You can also download the NDTV Cricket app for Android or iOS.