Azhar Ali and Haris Sohail added 126 for the third wicket as Pakistan ended Day 1 with 207 runs for the loss of four wickets. 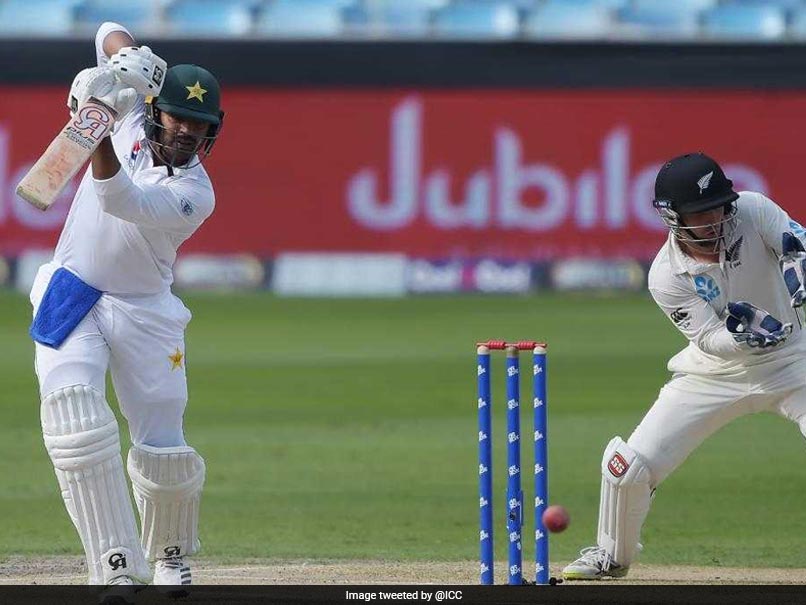 Haris Sohail remained unbeaten on 81 at stumps on Day 1 of the second Test.© Twitter

Azhar Ali and Haris Sohail both hit gritty half-centuries but Pakistan were restricted by some tight New Zealand bowling and a lifeless pitch to 207-4 on the opening day of the second Test in Dubai on Saturday. Azhar and Sohail added 126 for the third wicket until a careless run out saw the end of Azhar for 81. Sohail had also eked out 81 from 240 balls by the close. After losing the first Test by four runs, Pakistan were keen to get on to the offensive early and set the tone of the match, prompting captain Sarfraz Ahmed to bat when he won the toss. But it was the Black Caps who had the better of the morning with Colin de Grandhomme, preferred over the more experienced Tim Southee for the second match running, ripping out both openers for nine each.

He had Hafeez caught at slip by Tom Latham in the eighth over and the same combination accounted for Iman-ul-Haq in de Grandhomme's next over.

Hafeez has managed just 66 runs in six innings since scoring a comeback hundred against Australia at the same venue last month.

Pakistan fears of a collapse to match the 7-41 they suffered in the fourth innings in Abu Dhabi in the first Test were allayed as Azhar and Sohail dug in. They added only 68 runs in the afternoon session and scoring at just over two runs per over.

Azhar, who made a valiant 65 in that unsuccessful 176-run chase in the first Test, was shaky at the start as he edged the second ball he faced off de Grandhomme through the slips.

Medium-pacer De Grandhomme was the pick of the Kiwi bowlers with 2-32 from his 19 overs.

Azhar went on to hit seven boundaries and a six in his 187-ball stay at the crease before an awful mix-up deprived him of a 14th hundred.

He drove left-arm spinner Ajaz Patel to mid-off and set off for a single but Sohail failed to respond. Substitute fielder Tim Southee threw the ball to wicketkeeper BJ Watling who whipped off the bails to run Azhar out.

Patel, who took seven wickets in his debut Test in Abu Dhabi, then had Asad Shafiq caught off a miscued drive to backward point where Neil Wagner took the catch.

Sohail was joined by Babar Azam who was 14 not out at the close by which stage they had added 33 for the fifth wicket.

Pakistan will be aiming to bat through to Sunday afternoon to capitalise on their solid start and put the New Zealand batsmen under pressure.

The third and final Test is in Abu Dhabi from December 3.

Haris Sohail Azhar Ali Dubai International Cricket Stadium, Dubai Cricket Pakistan vs New Zealand, 2nd Test
Get the latest updates on ICC T20 Worldcup 2022, check out the Schedule and Live Score. Like us on Facebook or follow us on Twitter for more sports updates. You can also download the NDTV Cricket app for Android or iOS.