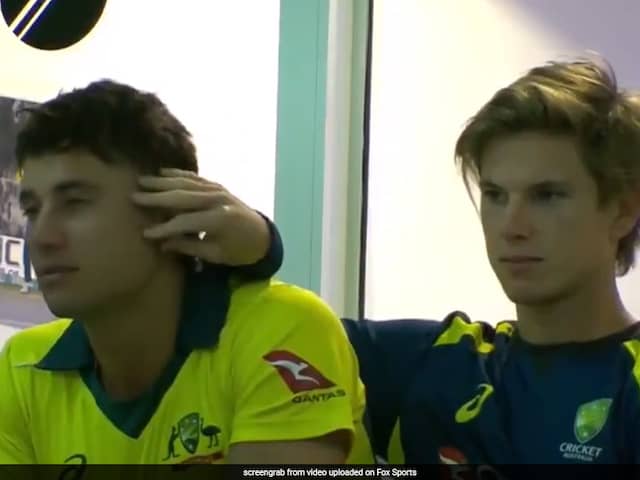 Australian cricketers Marcus Stoinis and Adam Zampa shared a moment of bizarre display of affection in front of the cameras during their side's run-chase in the first One-day International (ODI) of the five-match series against Pakistan in Sharjah on Friday. Stoinis and Zampa, who were sitting in the dressing room balcony, appeared to get very touchy while watching the run-chase. Zampa leisurely ran his hands through Stoinis' hair and the allrounder responded by leaning into his teammate sitting next to him. While Stoinis and Zampa seemed to be enjoying the moment, coach Justin Langer was not impressed.

As far as the match is concerned, Aaron Finch's fine century drove Australia to a convincing eight-wicket victory.

The Australian skipper scored 116 off 135 balls for his 12th ODI century that helped his team overhaul the 281-run target in 49 overs on a flat Sharjah stadium pitch.

The win gives Australia the lead in the five-match series and comes on the back of their 3-2 series win in India earlier this month.

"To be able to chase down the target for the loss of two wickets is nice. It's nice to keep the momentum with a fourth win in a row," Finch said.

Finch's match-winning knock overshadowed Haris Sohail's maiden one-day hundred (101 not out) which helped Pakistan to 280-5 in their 50 overs.

"We needed wickets at the top which did not come our way because Finch and Marsh handled the chase very well," stand-in captain Shoaib Malik said.

Sunday's second ODI is also being played in Sharjah, with the third in Abu Dhabi (March 27) and the last two in Dubai (March 29 and 31).

Pakistan Cricket Team Marcus Stoinis Adam Zampa Cricket
Get the latest Cricket news, check out the India cricket schedule, Cricket live score . Like us on Facebook or follow us on Twitter for more sports updates. You can also download the NDTV Cricket app for Android or iOS.