Aaron Finch's match-winning knock overshadowed Haris Sohail's maiden one-day hundred (101 not out) which helped Pakistan to 280-5 in their 50 overs. 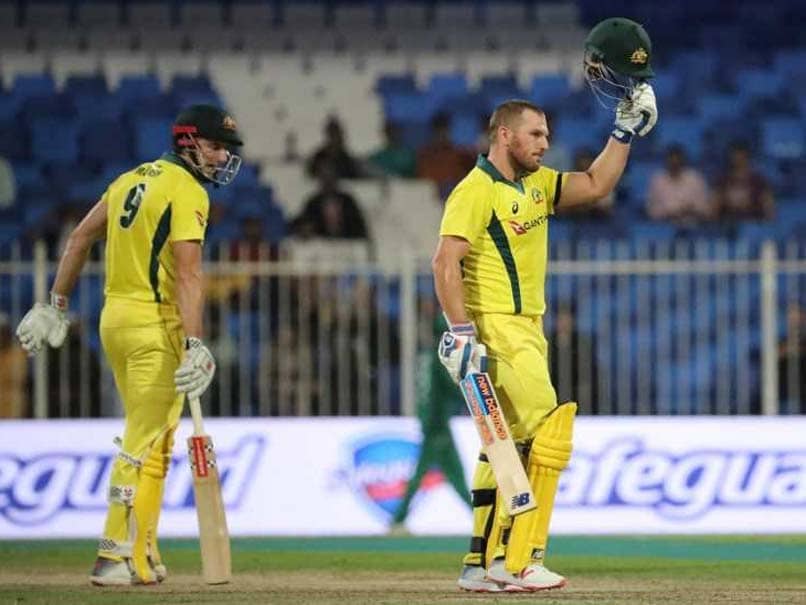 Aaron Finch's fine century drove Australia to a convincing eight-wicket win over a new-look Pakistan in the first one-day international on Friday. The Australian skipper scored 116 off 135 balls for his 12th one-day international century that helped his team overhaul the 281-run target in 49 overs on a flat Sharjah stadium pitch. The win gives Australia the lead in the five-match series and comes on the back of their 3-2 series win in India earlier this month. "To be able to chase down the target for the loss of two wickets is nice. It's nice to keep the momentum with a fourth win in a row," Finch said.

Finch's match-winning knock overshadowed Haris Sohail's maiden one-day hundred (101 not out) which helped Pakistan to 280-5 in their 50 overs.

"We needed wickets at the top which did not come our way because Finch and Marsh handled the chase very well," stand-in captain Shoaib Malik said.

"Congrats to Haris for getting a hundred but we did not push Australia hard," he added.

The 32-year-old Australia smashed Malik for a huge six towards deep mid-wicket to complete his century -- his first since June last year against England at Chester-Le-Street -- off 120 balls.

Aaron Finch, who knocked four sixes and eight boundaries, added an innings-building 172 runs for the second wicket with Shaun Marsh who scored an unbeaten 91 off 102 balls with four boundaries and two sixes.

With 46 needed Finch became Mohammad Abbas's maiden wicket but Peter Handscomb hit 30 not out to help Marsh cross the line.

Finch and Marsh came together after opener Usman Khawaja fell for 24 to medium pacer Faheem Ashraf, the only other success Pakistan's new-look bowling attack could achieve.

Pakistan rested six of their key players including regular skipper Sarfraz Ahmed in order to keep them fresh for the 2019 World Cup starting in UK from May 30.

But the young and inexperienced Pakistan led by Malik proved no match for Australia, who are on a roll after their win in India earlier this month.

Left-hander Sohail, who reached 1,000 runs in his 27th one-day international when on 40, anchored Pakistan's innings, adding 98 for the third wicket with Umar Akmal who made a 50-ball 48 in his first international match for two years.

Sohail took a single to complete his hundred in the last over, finishing with six boundaries and a six.

Pakistan had handed one-day debuts to opener Shan Masood and Abbas -- who have played 15 and 14 Tests respectively.

Masood put on 35 in an opening stand with Imam-ul-Haq (17) before off-spinner Nathan Lyon dismissed Imam in the seventh over, caught and bowled.

Masood, who hit five boundaries in his 62-ball 40, was then bowled by paceman Nathan Coulter-Nile who finished with 1-38 in his 10 overs.

Umar smashed three sixes in one Jhye Richardson over but fell one short of his half century.

Malik fell for 11 and Ashraf and Imad Wasim scored 28 each.

Wasim hit four boundaries and a six during his 13-ball unbeaten knock, helping Pakistan to 55 runs in the last five overs.

Sunday's second ODI is also being played in Sharjah, with the third in Abu Dhabi (March 27) and the last two in Dubai (March 29 and 31).

Haris Sohail Shoaib Malik Pakistan vs Australia, 1st ODI Cricket
Get the latest updates on India vs Australia Series, check out the India vs Australia Schedule for 2020-21 and Ind vs Aus live score . Like us on Facebook or follow us on Twitter for more sports updates. You can also download the NDTV Cricket app for Android or iOS.