Fakhar Zaman not only earned plaudits from fans but also received a huge compliment from captain Sarfraz Ahmed. 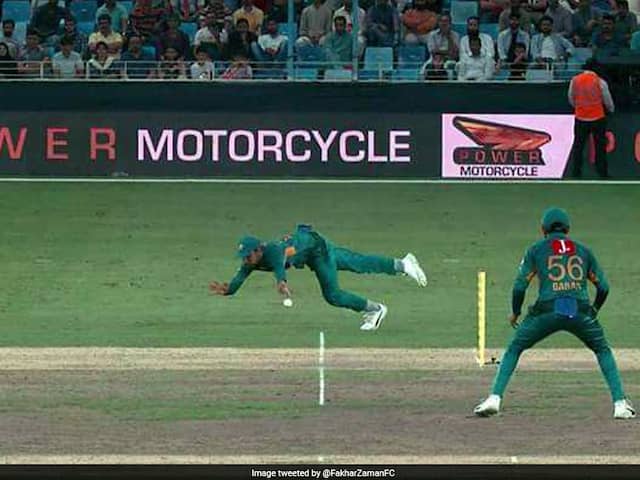 The Pakistan-Australia series has been nothing short of exciting courtesy brilliant performances from both teams. Be it the fighting century by Usman Khawaja in the first Test, followed by a sensational bowling performance by Mohammad Abbas or the comical Azhar Ali run-out, Australia series against Pakistan has produced great on-field moments. The latest entry on the list is the no-look run out affected by Fakhar Zaman in the second T20I match against Australia on Friday. Zaman not only earned plaudits from fans but also received a huge compliment from captain Sarfraz Ahmed.

Best Run Out I have ever seen pic.twitter.com/ObCYQhS2Dj

In the post-match conference, though Sarfraz rued a couple of dropped chances, he was all praises for Zaman.

Fakhar Zaman run out and mention of Jonty Rhodes by Sarfaraz . #PAKvAUS pic.twitter.com/mxY4d3pMqR

"I feel, the way Fakhar Zaman affected that run-out, even Jonty Rhodes has never pulled off anything like this," Sarfraz said.

The second T20I match also witnessed a controversial run out that left the Australian players fuming.

After the match, Australia all-rounder Glenn Maxwell took pot shots at the third umpire for giving the decision in favour of Pakistan.

On the match front, Pakistan upstaged Australia by 11 runs in the second T20I to take an unassailable 2-0 lead in the three-match series on Friday.

Pakistan had won the first match by 66 runs in Abu Dhabi on Wednesday. The third and final match will be played in Dubai on Sunday.

Aaron Finch Jonty Rhodes Cricket
Get the latest Cricket news, check out the India cricket schedule, Cricket live score . Like us on Facebook or follow us on Twitter for more sports updates. You can also download the NDTV Cricket app for Android or iOS.