Shaheen Afridi produced one of the most lethal spells of fast bowling ever seen in any level of T20 cricket. 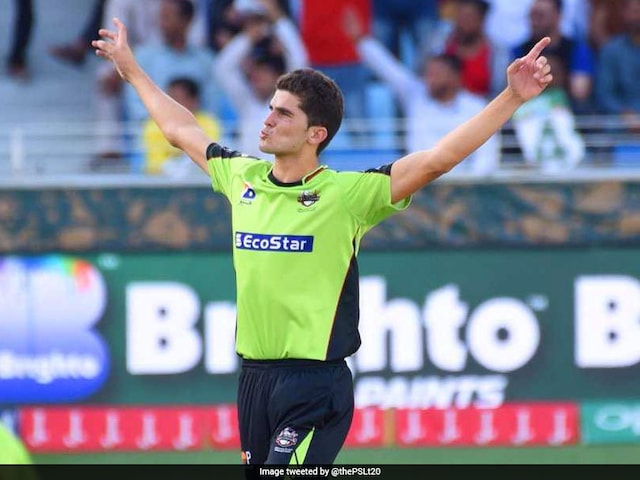 The name Afridi is quite a famous one in cricketing circles and immediately brings memories of a certain Shahid Afridi blasting bowlers to all corners of the ground. However, that monopoly over the name might be at an end. Pakistan have a new Afridi on the block and incidentally, he too is making a name for himself as a teenager. Shaheen Afridi had already announced himself to the world when he took an eight-wicket haul on his first-class debut in a domestic match in Pakistan. The 17-year-old once again grabbed the headlines on Friday -- this time on a much bigger stage, the Pakistan Super League (PSL).

Playing for Lahore Qalandars, Shaheen Afridi produced one of the most lethal spells of fast bowling ever seen in any level of T20 cricket. The left-arm pacer took five wickets, giving away just four runs as Multan Sultans suffered a dramatic batting collapse.

Twitter was left spellbound by the performance of the young pacer with Shahid Afridi too hailing the 17-year-old.

Shabash Shaheen Shah Afridi... Champion in the making, finally some smiles for @lahoreqalandars fans, really happy for them

What a spell of bowling by Shaheen Afridi - best of the tournament so far! #LQvMS

Shaheen Afridi - Remember the name. Soon to be a Worldclass bowler #PSL2018

A new star is born .. 17 year old Shaheen Afridi is youngest to 5 wickets in HBLPSL.. a triple wicket maiden over and 18 dots out of 22 bowled .. you kidding me..

The sensational figures put Shaheen in fourth place in the list of most economical T20 five-fors. Sri Lankan spinner Rangana Herath heads the list, courtesy his figures of five for three he achieved against New Zealand.

Table-toppers Multan Sultans, who opted to bat, were cruising at 92 for one after 12.4 overs with Kumar Sangakkara going strong. But once the Sri Lankan veteran fell to Sunil Narine, the rest of the Multan batsmen fell like nine pins.

And the man responsible for Multan Sultans dramatic collapse was the 17-year-old who showcased some exceptional skills with the ball. Shaheen Afridi accounted for five of Multan Sultans last seven wickets. The Sultans lost their last nine wickets for just 22 runs and were bowled out for a paltry 114.

The Lahore Qalandars made a meal of the chase but managed to overhaul the target with six wickets in hand and eight balls to spare.

Comments
Topics mentioned in this article
Pakistan Cricket Team Shahid Afridi Cricket
Get the latest Cricket news, check out the India cricket schedule, Cricket live score . Like us on Facebook or follow us on Twitter for more sports updates. You can also download the NDTV Cricket app for Android or iOS.