PAK vs ZIM: Pakistan defeated Zimbabwe by eight wickets in the second Twenty20 International in Rawalpindi to take a 2-0 lead in the three-match series. 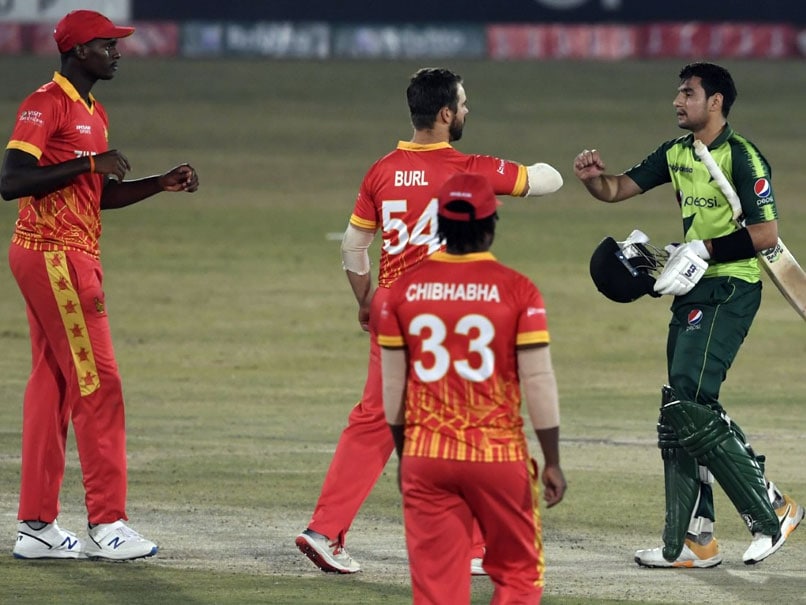 Pakistan have taken an unassailable 2-0 lead in the three-match series against Zimbabwe.© AFP

Pakistan proved too strong for a sloppy Zimbabwe as they won the second Twenty20 international by eight wickets in Rawalpindi on Sunday, taking an unassailable 2-0 lead in the three-match series. Riding on half centuries from skipper Babar Azam (51) and 20-year-old Haider Ali (66 not out), Pakistan made short work of a modest 135-run target, achieving victory with 29 balls to spare. Zimbabwe, who were sent in to bat, never recovered from early strikes by paceman Haris Rauf (3-31) and spinner Usman Qadir (3-23) as they were restricted to 134-7 in 20 overs.

Haider, playing only his third international match, cracked three sixes and six boundaries in a 43-ball knock and was declared Man of the Match.

Azam, ranked second in the world T20 batting rankings, smashed eight fours and a six off just 28 balls, the fastest of his 16 T20 international fifties.

Haider and Azam added 100 for the second wicket, taking away the game from Zimbabwe despite losing opener Fakhar Zaman for just five in the third over.

Khushdil Shah cracked the winning boundary in his 11 not out.

The last match of the series is scheduled for Tuesday, also in Rawalpindi.

Earlier, Ryan Burl (32 not out) and Wesley Madhevere (24) were the main scorers for Zimbabwe, with Burl smashing the last ball of the innings for a big six.

Donald Tiripano (15) added 30 for the seventh wicket with Burl before falling to Rauf in the 19th over.

Babar Azam Haris Rauf Haider Ali Cricket Pakistan vs Zimbabwe, 2nd T20I
Get the latest updates on IPL Auction 2023 and check out  IPL 2023 and Live Cricket Score. Like us on Facebook or follow us on Twitter for more sports updates. You can also download the NDTV Cricket app for Android or iOS.