On This Day, Dinesh Karthik Helped India Win The Nidahas Trophy vs Bangladesh 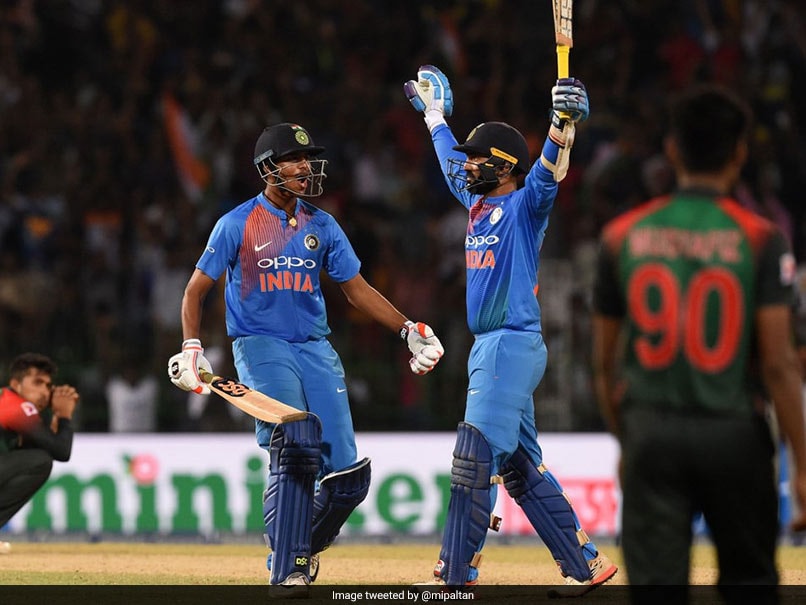 Dinesh Karthik after leading India to victory during the Nidahas Trophy vs Bangladesh.© Twitter

On this day three years ago, wicket-keeper batsman Dinesh Karthik's carnage helped India snatch victory from the jaws of defeat in the final of the Nidahas Trophy against Bangladesh at the R Premadasa Stadium in Colombo. India beat Bangladesh by four wickets in the final match of the tournament as Karthik's flat-six off the last ball of the match took the Rohit Sharma-led side home. In the final, Bangladesh had scored a challenging 166 in their allotted 20 overs. In response, Team India found themselves reeling at 98 for the loss of four wickets. The wicket of Manish Pandey in the 18th over and Vijay Shankar's sluggish innings only added to the pressure as the required run-rate increased.

With 34 runs still needed of the last two overs, in walked Karthik and bludgeoned the Bangladesh bowling attack. The wicket-keeper batsman hammered the first three balls to the boundary as India scored 22 runs from the penultimate over.

On the last ball when Men in Blue needed five runs, Karthik smashed a flat six over extra cover to hand India a victory not many could imagine. His eight-ball knock included two fours and three sixes and he was adjudged Man of the Match

Karthik will now be seen in action for Kolkata Knight Riders (KKR) in the Indian Premier League (IPL) scheduled to commence from April 9.

KKR failed to qualify for the playoffs last season and Karthik finished with 169 runs from 14 games. The cash-rich league will kick off with Mumbai Indians and Royal Challengers Bangalore (RCB) locking horns. While KKR will square off against SunRisers Hyderabad in their first match of the tournament on April 11.