Delhi's chase of 271 depended on Sehwag after Kohli (5) was dismissed cheaply. Sehwag didn't disappoint as blazed away to a fifty off just 33 balls before being dismissed against the run of play. 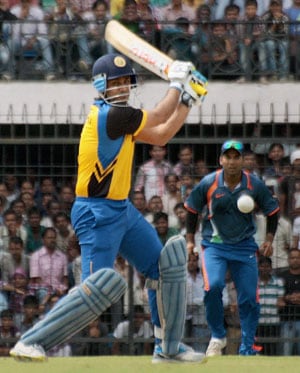 A good crowd turned up at the Holkar Cricket Stadium in Indore on Thursday (September 26) to watch Yuvraj Singh, Virat Kohli and Virender Sehwag wield the willow. But on the day, it was Abhishek Nayar's sparkling 91 that proved to be the difference as India Blue beat Delhi by 18 runs in the opening match of the NKP Salve Challenger Trophy.

Delhi's chase of 271 depended on Sehwag after Kohli (5) was dismissed cheaply. Sehwag didn't disappoint as blazed away to a fifty off just 33 balls before being dismissed against the run of play. After that, the innings appeared to be headed nowhere, but Bhatia's never-say-die attitude inspired the lower-order to keep the fight going even as wickets continued to tumble.

Bhatia's knock of 65 and the ninth-wicket stand of 56 with Ashish Nehra kept Delhi in the hunt before he was undone by a slower delivery from Ankit Rajpoot. Nehra remained unbeaten on 37 when the final nail in Delhi's coffin was nailed by Vinay, who dismissed Parwinder Awana (12), as they were bowled out for 252 in 47.5 overs.

Yuvraj's absence due to back spasms meant the relatively inexperienced India Blue, led by Vinay, needed a collective batting effort to post a competitive total after being sent in to bat by Kohli, the Delhi captain.

Naman Ojha (23) and Akshath Reddy (53) struggled early on and the pressure of getting the scoreboard moving consumed Ojha, who was trapped leg before by Bhatia, trying to play a cheeky paddle as the 56-run opening stand was broken in the 16th over.

Manish Pandey (0) was bowled four balls later, playing down the wrong line to a Bhatia delivery that nipped back in to take the middle and leg stump. When Sibsankar Roy, the Assam batsman, was dismissed for 5, India Blue had slipped from 56 for no loss to 66 for 3 in the space of 15 deliveries.

Bhatia's cutters proved to be difficult to negotiate as Akshath tried to rebuild the innings in Nayar's company. Akshath, for large parts of his innings, was stuck in first gear and his inability to rotate strike forced an ugly hoick across the line with midwicket inside the circle. He was bowled and India Blue slipped further.

Nayar walked in to attacking fields, but he quickly unsettled the bowlers, the spinners in particular, by employing the sweep shot to good effect. Nayar continued on his merry way as he continued to plunder runs in an effortless manner, in sharp contrast to how the innings had transpired till he walked in to bat. 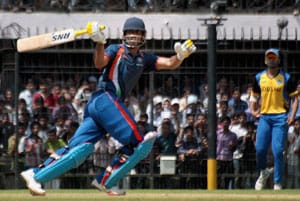 Nayar fell nine short of a well-deserved century, but base was set for a late onslaught that was masterminded by Piyush Chawla (40 not out) and Bhuvneshwar Kumar (29 not out) as India Blue ended on 270 for 6, a total that looked unlikely at the halfway mark.

Delhi's chase hit a roadblock right at the outset as Bhuvneshwar accounted for Mohit Sharma (0) and Kohli off consecutive overs. Enter Sehwag and the mood of the game completely changed even as Unmukt Chand (13) was run out at the bowler's end after a terrible mix up.

But that didn't play on Sehwag's mind as he continued to attack, taking toll of anything that was short and outside off. A few fierce cut shots, an inside out six over deep extra cover and a few wristy flicks brought him a quickfire fifty as India Blue went on the defensive.

Amidst heightened expectation came a sudden death as Sehwag got too close to the pitch of a ball and lobbed one back to Iresh Saxena, the left-arm spinner, in the 14th over to bring an end to the thrill-a-minute ride.

Milind Kumar (22) and Puneet Bisht (23) tried to rebuild but couldn't convert their starts, leaving Bhatia with a mountain to climb. And he nearly did, all alone, bringing up a fighting half-century, but the prospects of a heroic finish that was sparked by Nehra's lusty blows came crashing down when Parvinder Awana was bowled as Delhi went down fighting.