Team manager Mike Sandle said he was disappointed in Bracewell, who had brought unwelcome attention on the Black Caps on the eve of the Test. New Zealand lost both the recently completed one-day and Twenty20 series against England 2-1 and go into the Test series as underdogs. 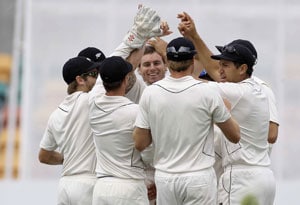 New Zealand fast bowler Doug Bracewell apologised Tuesday for an off-field incident in which he injured his foot, ruling him out of the opening Test against England in Dunedin.

New Zealand Cricket (NZC) said Bracewell cut his right foot on glass in an "unfortunate accident" while cleaning up at his Napier home on Saturday.

New Zealand media reported the accident occurred after a party at Bracewell's house that attracted complaints from neighbours.

He was initially expected to undergo a fitness test to assess whether he could face England on Wednesday but coach Mike Hesson said medics had given the bowler no chance of playing and Ian Butler had been called into the squad.

Team manager Mike Sandle said he was disappointed in Bracewell, who had brought unwelcome attention on the Black Caps on the eve of the three-Test series.

"We've told Doug that he needs to take responsibility for what happens around him and that he needs to do all he can to ensure his preparation for international cricket is not compromised," Sandle said.

"Doug is very sorry for any inconvenience he has caused his team-mates and members of the public, and he has apologised to his neighbour in Napier."

Bracewell, 22, was briefly suspended from the Black Caps last year after becoming involved in an alcohol-fuelled row with a member of the public in a Napier bar following a loss to South Africa.

New Zealand lost both the one-day and Twenty20 series against England and go into the Test series as underdogs.

Comments
Topics mentioned in this article
Cricket England Cricket Team Doug Bollinger Doug Bracewell New Zealand Cricket Team
Get the latest updates on SA vs IND 2021-22, check out the Schedule and Live Score . Like us on Facebook or follow us on Twitter for more sports updates. You can also download the NDTV Cricket app for Android or iOS.