At stumps, Sri Lanka were 88 for four in reply with Angelo Mathews not out 27 and Roshen Silva on 15. 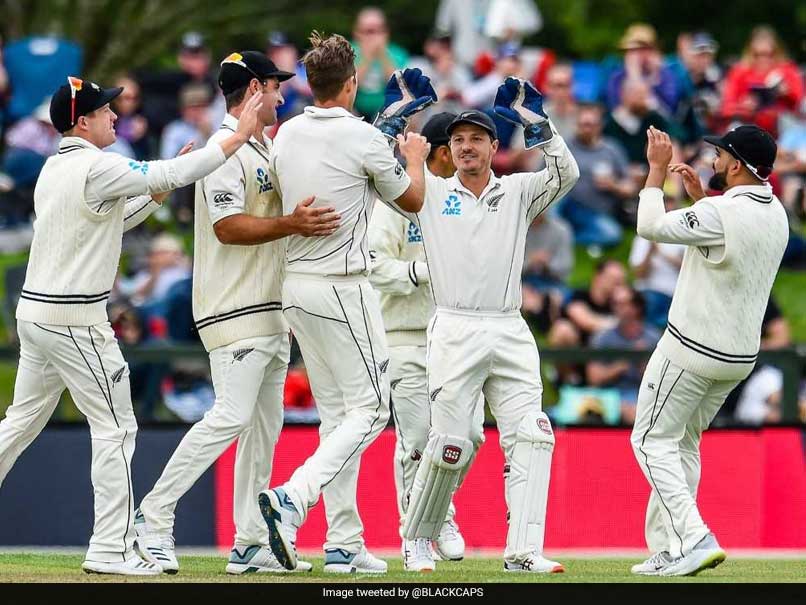 New Zealand knew they were in for a tough time when they lost the toss.© Twitter

Suranga Lakmal and Tim Southee vied for early honours as 14 wickets fell to leave the deciding second Test between New Zealand and Sri Lanka evenly poised on Day One in Christchurch on Wednesday. "The first session (on Thursday) will be important for both teams," Southee said at the end of a day in which he top-scored for New Zealand with 68 and then took three quick Sri Lankan wickets. After Sri Lanka won the toss and opted to bowl, Lakmal produced a career-best five for 54 as New Zealand crumbled and were all out for 178 in 50 overs.

At stumps, Sri Lanka were 88 for four in reply with Angelo Mathewsnot out 27 and Roshen Silva on 15 while Southee had three for 29.

The 31-year-old right-arm quick rarely gets a chance to shine in the sub-continent where spinners dominate, but the green Hagley Oval wicket and heavy cloud cover were ripe to be exploited.
"In the fourth over, he got the line and length spot on and from there he was exceptional," the coach said. "The wicket was conducive enough for him to do with the ball what he wanted to."

New Zealand knew they were in for a tough time when they lost the toss, with Southee feeling their fortunes improved after he took 14 off one Lakmal over to put the star Sri Lankan performer out of the attack.
"They then changed the length that had worked so well for them and it worked in our favour," he said.
In a marathon opening session, Lakmal bowled unchanged for 16 overs as he tore New Zealand apart with figures at one stage of four for 11. He returned late in the innings to remove Neil Wagner to eclipse his previous best of five for 63 against South Africa two years ago.

Southee and BJ Watling (46) offered spirited resistance for New Zealand with a 108-run stand for the seventh wicket while Ross Taylor (27) was the only other home batsman to score more than 10.

Southee, batting at better than a run a ball, hit three sixes and six fours in his innings and brought up the New Zealand hundred with a thunderous stroke which Silva managed to get a hand to but both ball and fielder ended up over the rope.

After the drawn first Test in Wellington, New Zealand need to win in Christchurch to secure a fourth consecutive series win for the first time.

Sri Lanka is pushing to end a run of six consecutive Tests against New Zealand without a win.
They drew first blood by winning the toss and predictably bowled first, giving Lakmal the opportunity to put his full repertoire on display as he moved the ball both ways.

There were catches by the wicketkeeper, second slip, and mid-off, as well as a, bowled as he sent Jeet Raval (six), Tom Latham (10), Kane Williamson (two) and Henry Nicholls back to the pavilion in his opening spell.

Lahiru Kumara joined the wicket spree with two dismissals, including the fortunate run out of Taylor.
An attempt to stop a straight drive from Watling saw the ball crash through Kumara's fingers and on to the stumps with Taylor backing up out of his crease.

Suranga Lakmal
Get the latest updates on IPL Auction 2023 and check out  IPL 2023 and Live Cricket Score. Like us on Facebook or follow us on Twitter for more sports updates. You can also download the NDTV Cricket app for Android or iOS.