BJ Watling scored a battling 205 and Santner added three second-innings wickets to his maiden Test century as New Zealand grabbed the advantage against England on Day 4. 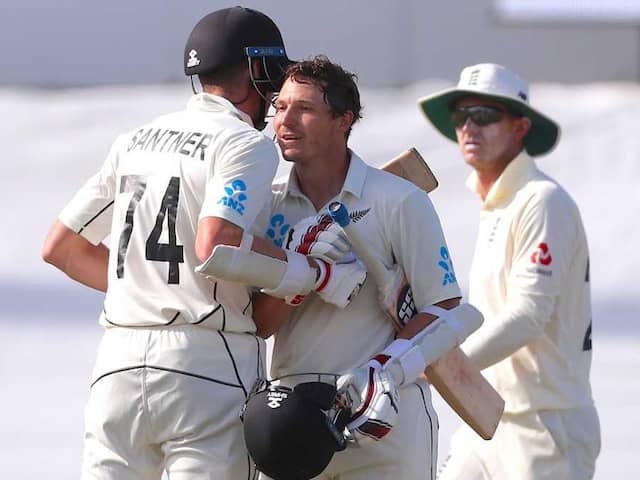 England were battling for survival after Mitchell Santner took three cheap wickets following a match-turning double century by BJ Watling in the first Test against New Zealand on Sunday.

After New Zealand declared at 615 for nine on day four in Mount Maunganui, England were 55 for three at stumps, needing a further 207 on the final day if they are to make the Black Caps bat again.

Watling swung the match firmly New Zealand's way with his Test best 205 and a record-breaking partnership with Santner who scored a maiden century and then capped his remarkable day by taking three wickets for six runs.

"It's not going to be easy to get seven wickets on that (pitch)," Santner said. "It's nice to get some footies (footmarks) and the cracks are starting to open.

"It's nice to see some spin now and hopefully get a roll tomorrow."

England wicketkeeper Jos Buttler blamed scoreboard pressure for the tourists' predicament after they had held the upper hand when New Zealand were 197 for five before Watling's marathon effort kept them in the field for a tiring 201 overs.

"That's a big learning point for us. Just when you think you're getting to the place you need to be, and doing the hard work, there's a lot more hard work to come," he said.

"New Zealand played a very patient game with the bat and showed us how to play that patient game of batting on flat wickets and setting your sights high."

After more than two days in the field, much of it watching Watling and then Santner take the game away from them, England had an uncomfortable two hours batting with openers Dom Sibley (12) and Rory Burns (31) as well as nightwatchman Jack Leach (nought) all falling to Santner.

Sibley's wicket was the first by a New Zealand spinner on home soil since March 2018 with 101 consecutive Test wickets in 11 innings in between having all fallen to seamers.

Watling shared a 116-run partnership with Colin de Grandhomme and then put the home side firmly in charge as he rewrote the record books with Santner.

Their partnership of 261 smashed the previous New Zealand record seventh wicket stand of 225 by Chris Cairns and Jacob Oram against South Africa at Eden Park in 2004.

When New Zealand declared soon after Jofra Archer claimed Watling's wicket, the 615 was their highest total against England, going past their 551-9 declared at Lord's in 1973.

Watling faced 473 deliveries and hit 24 fours and a six during more than 11 remarkable hours of batting which extended his unbroken time in the middle to 16 hours 16 minutes after he batted for 306 minutes to score an unbeaten 105 in his last Test innings against Sri Lanka three months ago.

Sam Curran, who claimed Santner's wicket, finished with three for 119.

Mitchell Santner Cricket
Get the latest Cricket news, check out the India cricket schedule, Cricket live score . Like us on Facebook or follow us on Twitter for more sports updates. You can also download the NDTV Cricket app for Android or iOS.