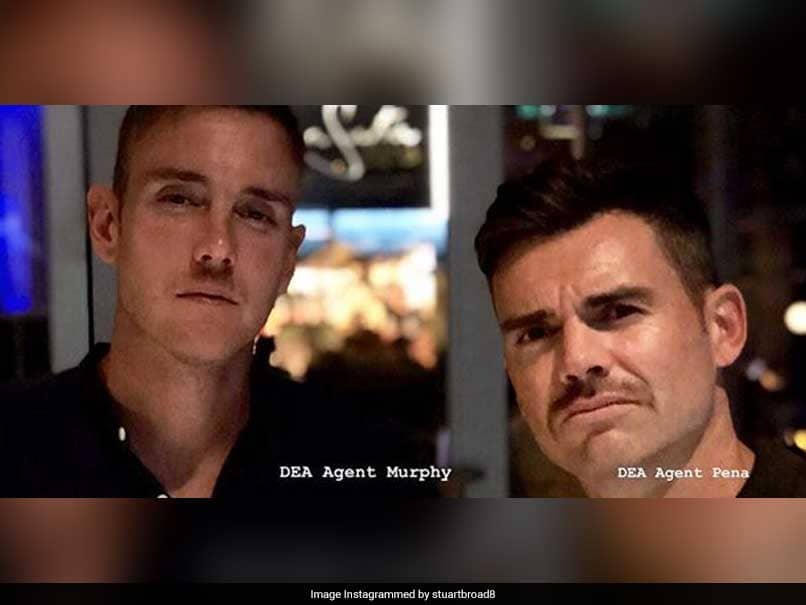 England pacers Stuart Broad and James Anderson imitated characters from the famous Netflix series Narcos. Stuart Broad took to Instagram to post the picture of himself with fellow pacer James Anderson, where they can be seen imitating on-screen characters DEA Agents Stephen Murphy and Javier Pena. In the Narcos series, Pena can be seen investigating Colombian drug lord Pablo Escobar and the Medellin Cartel with his colleague Murphy. Posting the image on Instagram, English speedster Broad captioned it, "Narcos."

"Yes I'm not playing this game, Broady's going," Anderson said Wednesday, expressing frustration over a tour in which he has taken just one wicket in two Tests where spinners have dominated.

Anderson, who has taken more Test wickets than any other fast bowler in history, said that while Broad was "delighted" at getting a chance he was feeling like a "spare part".

"The thinking is that with the series sewn up it's an opportunity to rotate."

"I think the feeling is they want Broady to get some Test cricket under his belt," added the 36-year-old.

England go into the third and final Test in Colombo with a 2-0 lead and gunning for a whitewash.

England sewed up the series -- a first away series win since beating South Africa in 2015-16 -- on Sunday in Kandy.

And Anderson said he was happy to have been part of a squad that has played so well away from England.

The veteran of many highs and lows in England's fortunes said the tour under captain Joe Root had been "a real big stepping stone for us as a team."

Stuart Broad Cricket
Get the latest updates on IPL 2020, check out the IPL Schedule for 2020 and Indian Premier League (IPL) Cricket live score . Like us on Facebook or follow us on Twitter for more sports updates. You can also download the NDTV Cricket app for Android or iOS.