The ICC shared the video of MS Dhoni's famous run out from the T20 World Cup 2016. 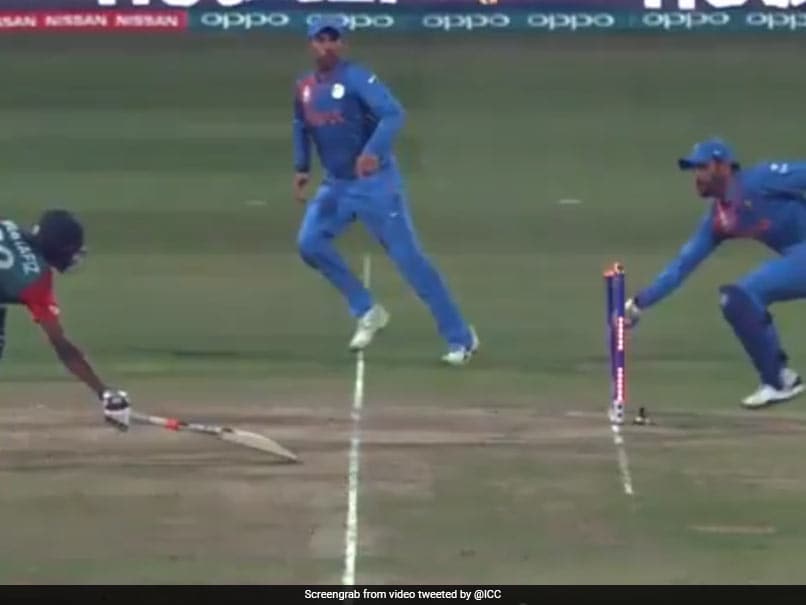 MS Dhoni ran out Mustafizur Rahman on the last ball of the match.© Twitter

MS Dhoni, on this day four years back in 2016, helped India steal a win from Bangladesh with his brilliant run out during the T20 World Cup. In the last ball of the final over, Bangladesh needed 2 runs to win and one to tie the game. Hardik Pandya was bowling the final over of the game, he bowled a dot ball. Bangladesh batsmen tried to steal a single which would have leveled the score and resulted in a super over but, MS Dhoni sprinted towards the stumps and ran Mustafizur Rahman out to help India steal a win by one run.

During the match, Bangladesh won the toss and asked India to bat. The Indian batsmen struggled against the Bangladeshi bowlers throughout their innings.

Suresh Raina was the top scorer with 30 runs from 24 balls which comprised of two sixes and a boundary which helped India reach a competitive total of 146 in 20 overs.

Bangladesh came out to bat and looked in complete control after losing an early wicket. However, it was the final over of the match in which Hardik Pandya dismissed Mushfiqur Rahim and Mahmudullah in successive deliveries to bring India back in the match.

The 26-year-old all-rounder was good with the bat as well, he scored 15 off 7 deliveries which were important runs from India's perspective.

Ravichandran Ashwin was adjudged 'Player of the Match' for his brilliant spell of 2 for 20 in his quota of 4 overs.

Bangladesh Cricket Team Cricket
Get the latest updates on IPL Auction 2023 and check out  IPL 2023 and Live Cricket Score. Like us on Facebook or follow us on Twitter for more sports updates. You can also download the NDTV Cricket app for Android or iOS.