Virat Kohli recalled the ICC T20 World Cup match from 2016 when he and MS Dhoni were involved in a crucial partnership as India beat Australia by six wickets at Mohali. 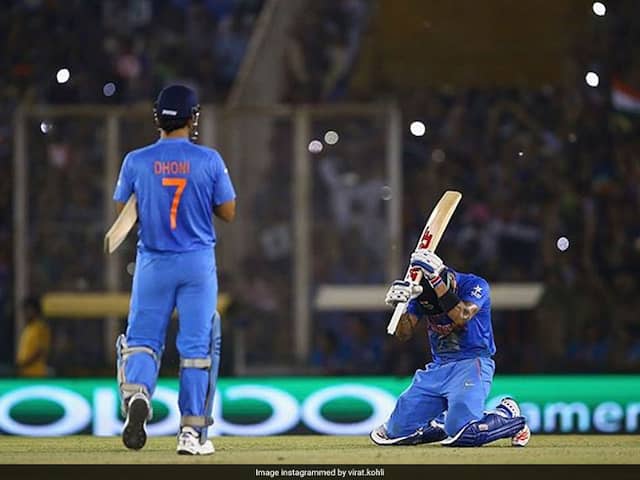 MS Dhoni led India to the title victory in the inaugural edition of the ICC T20 World Cup in 2007. In 2016, then captain MS Dhoni aimed for a second T20 World Cup, but India lost to the West Indies in the semi-final in Mumbai. Current India skipper Virat Kohli recalled a "special night" from the tournament and thanked the wicketkeeper-batsman for making him "run like in a fitness test". Virat Kohli tweeted, "A game I can never forget. Special night. This man, made me run like in a fitness test".

A game I can never forget. Special night. This man, made me run like in a fitness test @msdhoni pic.twitter.com/pzkr5zn4pG

On March 27, 2016, India defeated Australia by six wickets in their last group stage match to qualify for the T20 World Cup semi-finals.

Kohli top-scored for India with an unbeaten 82-run knock, thanks to a crucial partnership with Dhoni for the fifth wicket in chase.

Dhoni was unbeaten on 18 off 10 balls as India pulled off a 161-run chase with five balls to spare in Mohali.

The 38-year-old Dhoni last played a T20I for India in February 2019, against Australia in Bengaluru.

According to PTI, it couldn't be ascertained whether the selectors spoke to Dhoni about his availability for the home series against South Africa.

The rest of the squad is almost like the one that blanked the West Indies 3-0 in the previous series in the United States and the Caribbean.

Pacer Bhuvneshwar Kumar is the only player left out as a part of the workload management programme.

The opening T20I is slated to take place in Dharmasala on September 15. The second and third match will be played on September 18 and 22 respectively.

MS Dhoni Cricket India vs South Africa, 2019
Get the latest Cricket news, check out the India cricket schedule, Cricket live score . Like us on Facebook or follow us on Twitter for more sports updates. You can also download the NDTV Cricket app for Android or iOS.