After the match, Afghanistan players made the moment special for Mohammad Nabi by giving him Guard of Honour near the sidelines. 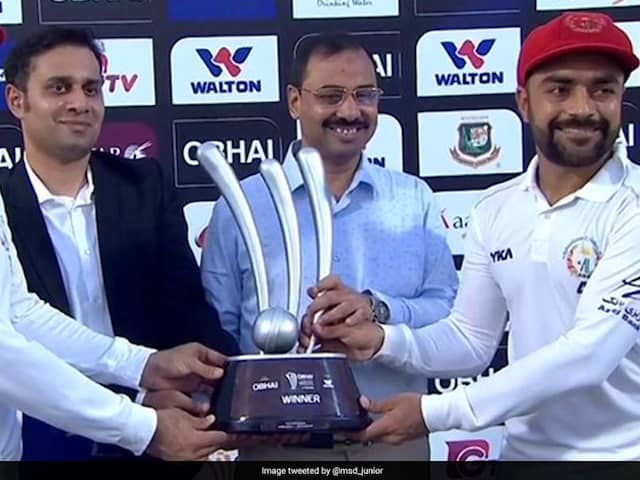 Rashid Khan dedicated his Player of the Match award to Mohammad Nabi.© Twitter

Mohammd Nabi, 34, on Monday bid farewell to the longest format of the game on a happy note after Afghanistan thrashed Bangladesh by 224 runs in the one-off Test at Zahur Ahmed Chowdhury Stadium,Chattogram. Nabi had already announced that he will bring curtains down on his international Test career on September 06, a day after the match started. After the match, Afghanistan players made the moment special for their former captain by giving him Guard of Honour near the sidelines. After Afghanistan got the Test nation status in July 2017, they have played three Test matches and Mohammad Nabi was part of the team on every occasion. However, he failed to make an impression in the longest format as he finished his career with just 33 runs in six innings. He also managed to pick eight wickets in his short Test career.

Afghanistan's current skipper Rashid Khan, who led his side from the front, praised Nabi for helping him and other young spinners. Rashid also dedicated his Player of the Match award to his former skipper.

"Legend Nabi had his last game, he's helped us a lot and I thank him for his contribution to Afghanistan. I would like to dedicate this Man of the Match award to him," Rashid said at the post-match presentation.

Nabi will continue to represent Afghanistan in One-day Internationals (ODIs) as well as Twenty20 Internationals (T20Is) -- two formats where he has experienced a fair bit of success.

Like many ageing players, it is understood that Nabi retired from Test cricket in a bid to prolong his white-ball career.

After Test match, Afghanistan will shift their focus on the T20 tri-series against hosts Bangladesh and Zimbabwe. The first match of the triangular tournament will be played on September 13, with Bangladesh taking on Zimbabwe at Shere Bangla National Stadium, Dhaka.

Bangladesh Cricket Team
Get the latest updates on IPL 2020, check out the IPL Schedule for 2020 and Indian Premier League (IPL) Cricket live score . Like us on Facebook or follow us on Twitter for more sports updates. You can also download the NDTV Cricket app for Android or iOS.