Mohammad Amir and the Bangladesh Premier League are both eyeing a redemption after undergoing turbulent times in the recent past. 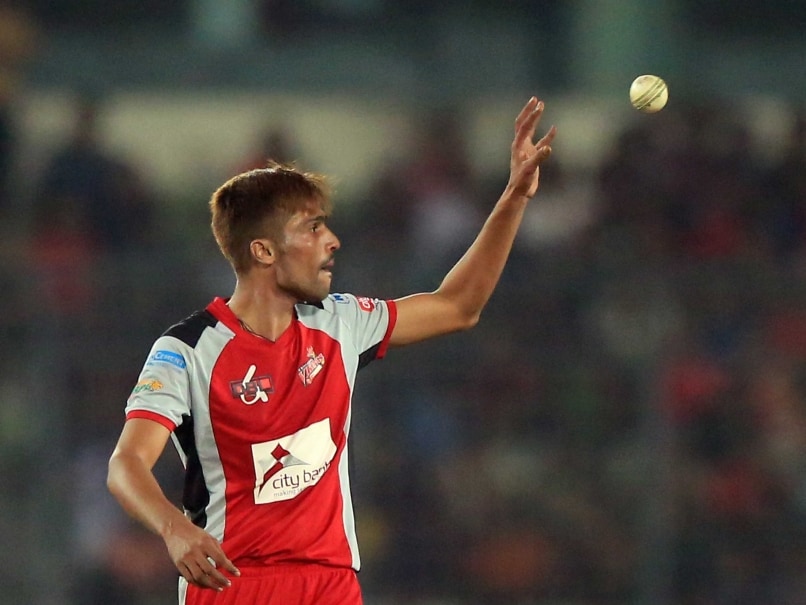 Mohammad Amir, who plays for the Chittagong Vikings, came back in style by picking 4/30.© AFP
Dhaka:

Mohammad Amir's last appearance on a cricket pitch outside his native Pakistan led to a six-month sentence in a British prison for corruption. (Mohammad Amir Shines on Bangladesh Premier League Debut)

Five years on, the paceman was the headline act in the opening match as Bangladesh's Twenty20 league staged its own comeback after a fixing scandal. (Pakistan Players Resist Comeback of Tainted Trio)

Amir, playing for the Chittagong Vikings against the Rangpur Riders, took four for 30 on Sunday, delighted to be competing once more against stars such as Pakistan's Test skipper Misbah ul-Haq whom he bowled with a perfect yorker at Dhaka's national stadium. (Bangladesh Premier League Comes Back After One Year)

Amir, now 23, was jailed in 2011 after admitting bowling no balls the previous summer against England at Lord's in exchange for cash.

Their hopes of returning for Pakistan look bleak, given they are in the autumn of their careers.

But Amir, who has been playing Pakistan domestic cricket since earlier this year, told AFP recently he saw the BPL as "the first step towards reviving my international career" as he eyes next year's World T20 in India.

Although Amir has refused to talk to the media in Bangladesh, he said before his departure from Pakistan that he was "really thankful to the team for choosing me and I will try my best to give them my 100 percent."

His comeback remains controversial, with Pakistan batsman Mohammad Hafeez refusing to sign for the Vikings with Amir in its ranks.

As Amir struggles to rebuild trust, the BPL faces a similar challenge after its 2013 edition was blighted by a scandal involving players and a team owner.

An embarrassed Bangladesh Cricket Board cancelled last year's edition but now believes its house is in order.

Chief executive Nizamuddin Chowdhury said the BCB always had "zero tolerance" of corruption but felt compelled to do more after 2013.

It now has its own anti-corruption unit and runs an extensive education programme for players which includes addresses by police.

"A lot of things happened because of a lack of education, players not being aware of the consequences, not only for themselves but for the nation as a whole," Chowdury told AFP.

Sayeed Uzzaman, the journalist who broke the scandal, said the BCB deserved praise for bringing crooks to justice but feared the game remained vulnerable.

"The bookies offer them a thousand times more (than they are paid by their teams)."

While Amir is back playing in front of packed crowds, Ashraful keeps fit with nets in his backyard, still dreaming of an eventual international recall.

Neighbours are happy to bowl at the 31-year-old who set the record for the youngest player to hit a Test century but Ashraful is full of regrets.

"I've lost almost everything I worked for ... I hope young cricketers will look at me and learn a lesson," the one-time golden boy told AFP.

The local underworld was thought to have got its hooks into Ashraful long before he was caught and made a tearful confession.

Now he urges players against falling into the same trap.

"My advice to any young cricketer would be say, very clearly, no."

His view is echoed by Sangakkara, Sri Lanka's former captain who recently retired from international cricket.

"It's very simple advice that I have for anyone, it's basically just say no and once you've said no you report every single approach," he told AFP while training for his BPL team, the Dhaka Dynamites.

"It's the responsibility of players as well to ensure the game stays clean. Cricket, or any sport for that matter, has to uphold the public trust because if the crowds don't come to watch, if they feel cheated, cricket will die."

Comments
Topics mentioned in this article
Pakistan Cricket Team Bangladesh Cricket Team Mohammad Amir Mohammad Hafeez Mohammad Ashraful Kumar Sangakkara Cricket
Get the latest updates on ICC T20 Worldcup 2022 and CWG 2022 check out the Schedule, Live Score and Medals Tally. Like us on Facebook or follow us on Twitter for more sports updates. You can also download the NDTV Cricket app for Android or iOS.