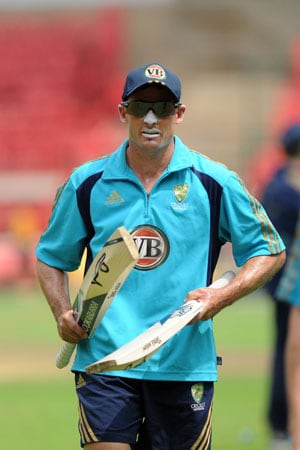 Selectors, as expected, decided to give Clarke, David Warner and Matthew Wade a break from the early ODIs after they played in all six Test matches against South Africa and Sri Lanka this Southern Hemisphere summer.

Injured pair paceman James Pattinson (side strain) and Shane Watson (calf) were not considered for selection for the opening two ODIs in Melbourne on January 11 and Adelaide on January 13.

And there was no place for 37-year-old Hussey, who has announced that the current third Test against Sri Lanka in Sydney will be his last in a 79-Test career.

Chief selector John Inverarity said Hussey, who had been planning to retire from international cricket at the end of the Australian summer, was omitted for the whole series because the selectors were looking to build toward the 2015 World Cup.

"Michael has been a tremendous ODI player for Australia over a long period of time, a match-winner for his country, and his presence in coloured clothing will be sorely missed," Inverarity said.

But there will be at least one Hussey in the squad, with younger brother David keeping his place as a middle-order batsman.

In Clarke's absence, Australia's Twenty20 skipper George Bailey will lead the team, while veteran Brad Haddin returns to take over the wicketkeeping duties from Wade.

"Michael (Clarke) has been battling a hamstring injury for a few weeks," Inverarity said.

"Matthew Wade and Brad Haddin are considered to be the two best keeper-batsmen in Australia," he said.

"Brad remains in consideration and he will play while Matthew has a break."

Inverarity said Hughes and Khawaja had earned a crack at the shorter form of the game, along with Finch.

"Phillip Hughes and Usman Khawaja are generally considered to be 'red-ball' cricketers, but their recent 50-over figures are most impressive," Inverarity said.

Cricket Australia said former Test batsman Dean Jones will be added to the coaching staff for the first two ODIs as batting coach, with Stuart Law deciding not to pursue the full-time batting coach role and returning to his job as Centre of Excellence high performance coach.

Comments
Topics mentioned in this article
Cricket Australia Cricket Team Michael Hussey Michael Clarke Brad Haddin Sri Lanka Cricket Team
Get the latest updates on ICC T20 Worldcup 2022 and CWG 2022 check out the Schedule, Live Score and Medals Tally. Like us on Facebook or follow us on Twitter for more sports updates. You can also download the NDTV Cricket app for Android or iOS.