Mike Hussey goes out a winner with Australian victory

Mike Hussey capped his final Test before retirement by steering Australia to 141-5 and a five-wicket win over Sri Lanka on Sunday, completing a 3-0 series sweep. 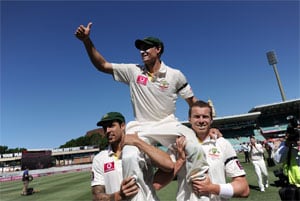 Mike Hussey bowed out of Test cricket with a win when he guided Australia to a five-wicket victory over Sri Lanka on Sunday, giving the home side a clean sweep of the three-match series.

Left-hander Hussey, playing in his 79th and final Test after announcing his international retirement, got his team over the line after the loss of five wickets on a tense fourth day at the Sydney Cricket Ground.

The 37-year-old provided the steadying hand as Australia made hard work of running down 141 runs for victory on a turning pitch.

At the close Hussey was unbeaten on 27, while Mitchell Johnson hit the winning run to end on one not out.

Left-arm spinner Rangana Herath had earlier threatened to bowl the Sri Lankans to their first-ever Test victory in Australia at the 13th attempt. He finished with three wickets for 47.

Young Australian fast bowler Jackson Bird was named man of the match with seven wickets and skipper Michael Clarke was picked as man of the series.

The umpires stunned the crowd when they took tea with just five runs left to decide the Test, leaving onlookers with a sense of anti-climax.

The tourists were all out for 278 in their second innings earlier in the day as Dinesh Chandimal prolonged the resistance, batting with the tail in a defiant unbeaten knock of 62 off 106 balls with 11 fours.

Chandimal shared in a fighting 41-run last-wicket stand with Nuwan Pradeep off 74 balls to give the tourists some vital extra runs and make things uncomfortable for the Australian batsmen on a turning pitch.

Herath was bowled by Bird for 10 and Suranga Lakmal swung wildly and was cleaned up by Johnson for a duck.

Johnson finished with three for 34 and Bird captured three for 76.

Sri Lanka got an early reward when the threatening David Warner was out first ball.

He was caught in the slips by Mahela Jayawardene off paceman Lakmal's first delivery for a duck, with the Australians going to lunch at 13 for one.

Phil Hughes hit four boundaries but never looked set, and was next out leg before wicket on review to Herath for 34 off 49 balls.

Captain Michael Clarke used his feet and crease well against the wily Sri Lanka spinners as Australia's score crept along.

Herath and Tillakaratne Dilshan tied down the batsmen, although a big lbw shout from Herath was turned down on review when Clarke was on 13.

But Dilshan got the skipper's prized wicket when he was caught off bat and pad for 29, bringing Hussey to the wicket in his final Test innings to a standing ovation.

Ed Cowan was out in the next over, lbw to Herath for 36 with 33 needed for victory.

First-innings centurion Matthew Wade was bowled by Herath for nine, setting up a fairytale finish for Hussey to be there for the win.

Comments
Topics mentioned in this article
Cricket Australia Cricket Team Michael Hussey Sri Lanka Cricket Team
Get the latest updates on ICC T20 Worldcup 2022 and CWG 2022 check out the Schedule, Live Score and Medals Tally. Like us on Facebook or follow us on Twitter for more sports updates. You can also download the NDTV Cricket app for Android or iOS.