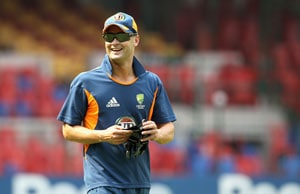 Australian captain Michael Clarke on Wednesday said he expects to have a full-strength squad, apart from David Warner, for the upcoming tri-series with South Africa and Zimbabwe.

Australia are due to play four one-dayers in Harare in August and September, two against each African nation, as well as a potential final.

Clarke said the tour was a crucial step in the team's preparations for next year's World Cup and he wants as strong a team as possible alongside him.

"It's an important series," he told reporters.

"Any one-day game now leading up to the World Cup is crucial to us as a team.

"The more success we can have leading into that tournament the better, so hopefully (it's) a full-strength team that's ready to play against two very good teams in tough conditions."

One player who will not be on tour is opener Warner, who has pulled out citing a draining playing schedule and the upcoming birth of his first child.

Australia get their tour underway against Zimbabwe on August 25 before meeting South Africa two days later, who will continue to be led in the limited-overs format by AB de Villiers.

Hashim Amla was named as the successor to Graeme Smith as South Africa's Test captain yesterday.

Clarke said it was too early to tell what kind of a leader Amla would be but he expects him to be a success.

"I was surprised but in saying that, I think Hashim is obviously a wonderful player," he said.

"I've enjoyed the challenges I've had against him and I think he'll do a fantastic job for South Africa.

"South African cricket is in great hands under Hashim."