Suspended Cricket South Africa CEO Gerald Majola has won the first round of his disciplinary hearing on the allegedly irregular IPL bonuses he paid to himself and other CSA staff. 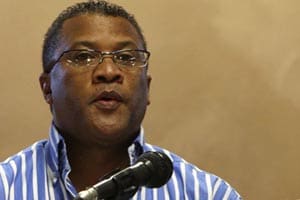 Suspended Cricket South Africa CEO Gerald Majola has won the first round of his disciplinary hearing on the allegedly irregular IPL bonuses he paid to himself and other CSA staff.

Majola's legal team has been calling for the chairman of the disciplinary hearing, John Myburgh, to step down because he made a non-binding advisory award in favour of CSA even before the hearing started.

Following arguments that Myburgh would not give Majola a fair trial, the senior lawyer decided to step down, which is now expected to delay Majola's hearing even further as a new chairman is sought.

Sports Minister Fikile Mbalula was already angered at delays in the finalisation of the hearing by the end of May this year.

Mbalula had instituted the Nicholson inquiry into the financial affairs of CSA after almost two years of internal wrangling at CSA over the bonuses, received after the second edition of the IPL was played in South Africa due to security concerns over elections at the time in India.

Nicholson called for both a disciplinary hearing and possible criminal charges against Majola.

Insiders at CSA said the current board was also getting increasingly frustrated at Majola's tactics, which lawyers in the know said, were designed merely to delay his hearing in the hope that interest in it will dissipate.

But there is little chance of that after the CSA board appeared before the parliamentary committee on sport on Wednesday where members had to explain the delay in implementation of the Nicholson recommendations.

CSA's acting CEO Jacques Faul told the Committee that plans were "on track" to ensure that cricket was representative of all the race groups in the country, citing the fact that half the players in the current side touring England were players of colour.

Faul said there were extensive development plans in place at local level to turn around the sport which was dominated by whites before South Africa's readmission to the international fold in 1992 after decades of isolation because of apartheid.

Comments
Topics mentioned in this article
Cricket MG Majola South Africa Cricket Team
Get the latest updates on ICC T20 Worldcup 2022 and CWG 2022 check out the Schedule, Live Score and Medals Tally. Like us on Facebook or follow us on Twitter for more sports updates. You can also download the NDTV Cricket app for Android or iOS.