Sri Lanka skipper Mahela Jayawadene cracked a half century, his first outside home grounds since 2009, to help steady his teams' first innings in the third Test against Australia at the Sydney Cricket Ground on Thursday. 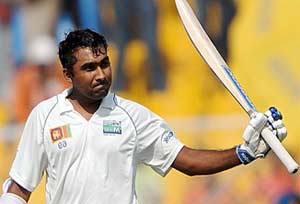 Captain Mahela Jayawardene reached his first Test half-century outside Sri Lanka in more than three years to bolster the injury-hit tourists' first innings in the third Test against Australia on Thursday.

In a welcome return to form after Kumar Sangakkara's enforced absence with a fractured finger, Jayawardene, who like Sangakkara has more than 10,000 Test runs, led from the front for his embattled team after two heavy Test defeats.

It was Jayawardene's first Test half-century outside Sri Lanka in 27 innings since a knock of 275 against India in Ahmedabad in November 2009, although he has scored heavily at home during the period.

Jayawardene brought up his 50 with a streaky edge that bounced in front of Mike Hussey at second slip and went to the ropes at the Sydney Cricket Ground.

He was dismissed for 72 in the hour before tea, caught at first slip by Michael Clarke off left-armer Mitchell Starc in the 43rd over.

Starc had a few anxious moments when English umpire Nigel Llong first checked for an overstepping no-ball but replays showed that Starc's heel was just behind the popping crease before he dragged it forward and the dismissal was confirmed.

The Sri Lanka skipper batted for 154 minutes and faced 110 balls, hitting 12 boundaries and a straight six off spinner Nathan Lyon.

Comments
Topics mentioned in this article
Cricket Kochi Tuskers Kerala Rajasthan Royals
Get the latest updates on ICC T20 Worldcup 2022 and CWG 2022 check out the Schedule, Live Score and Medals Tally. Like us on Facebook or follow us on Twitter for more sports updates. You can also download the NDTV Cricket app for Android or iOS.