Kuldeep Yadav Looks To Make Most Of Chances With R Ashwin, Ravindra Jadeja In Test Squad

Kuldeep Yadav reckons that with R Ashwin and Ravindra Jadeja in the squad, he has to make most of the opportunities in Test cricket. 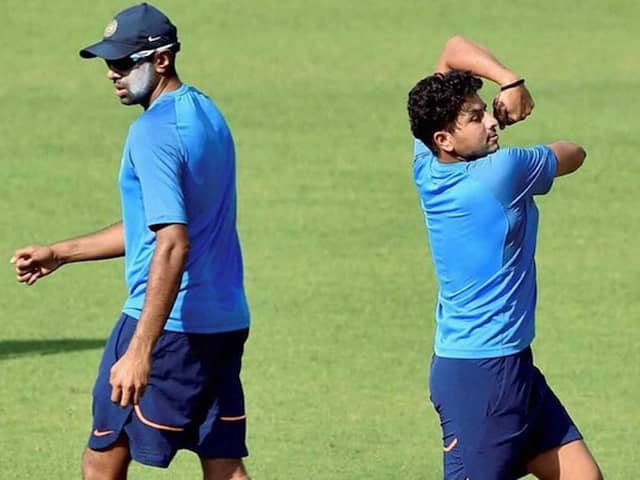 Kuldeep Yadav has picked up 24 wickets in six Test matches for India.© AFP

Kuldeep Yadav played his last Test match against Australia in Sydney in January where he picked up five wickets. However, the match ended in a draw as India won the four-match Test series 2-1. Kuldeep Yadav did not feature in India's next Test series against the West Indies where they registered a whitewash in a two-match series. India had three specialists spinners in the squad but only Ravindra Jadeja was picked in the playing XI for both Test matches in the West Indies. Speaking on his exclusion from red-ball cricket, Kuldeep said that when the team has three spinners, it's challenging to pick the right combination.

"When three spinners like Ashwin, Jaddu and I are in the squad, it's challenging to pick the right combination. You need to be ready to grab your chance. Of course, there is pressure because you only get a few chances, and you have to make full use of them," Kuldeep was quoted as saying by PTI.

Not only Test cricket but Kuldeep was dropped from India's T20I squads for the West Indies tour and home series against South Africa but that hasn't dented his confidence.

"So far, I have done a good job in limited-overs format. I feel very comfortable with the white ball," Kuldeep said.

"I am not worried about not being picked for the last two T20I series. Maybe the selectors felt I needed a break. Maybe the team thinks some changes are required. I respect that, and I have no complaints. I see this as an opportunity to do well in Tests," Kuldeep added.

Kuldeep was part of the India A side for the second unofficial Test against South Africa A, which ended in a draw in Mysore on Friday. The wrist spinner had a decent outing in the game, picking up four for 121 in 29 overs in the only innings India bowled in the match.

In 68 T20 matches since that 2016 T20 World Cup, Kuldeep has taken 81 wickets at an average of 22.97 (ninth-best in the world, second among Indians), and an economy rate of 7.60 (fifth among Indians). And, he feels wrist spinners are in demand currently.

"There is no doubt that wrist spinners are dominating the world," Kuldeep said.

"But sometimes, when you try to stop runs, you actually turn out to be expensive. We need to work on our accuracy. You need to accept that you do get hit for runs and work on being economical."

Kuldeep, however, feels it is very difficult to adjust to red-ball cricket after consistently featuring in the limited-overs formats.

"It's hard to play red-ball cricket when you aren't consistently playing that format," he said.

"If you aren't a regular in this format, it takes time to get into your rhythm. When you are consistently playing limited overs and suddenly switch to Tests without much preparation, it will be tough to excel.

"You need to bowl long spells, play practice games, to understand field placements and to know how to pick wickets. It was important for me to come here (in the India A game) and bowl as many overs as possible. There is still plenty of work to do," Kuldeep concluded.