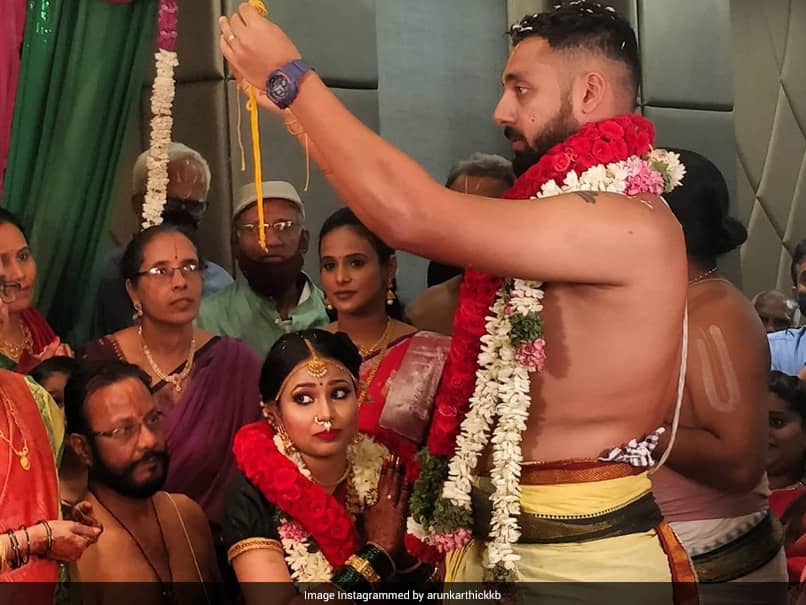 Kolkata Knight Riders (KKR) star spinner Varun Chakravarthy married his long-time girlfriend Neha Khedekar in a ceremony held in Chennai on Friday. The duo was originally scheduled to get married earlier this year. However, the coronavirus pandemic forced them to postpone the ceremonies. They were staying in different cities when the nation-wide lockdown was announced. While Varun was stuck in Chennai, with his area marked a containment zone around May-June, Neha spent the lockdown in Mumbai.

The duo even had a fun cricket twist to their wedding, where Varun was seen bowling a couple of under-arm deliveries to Neha, while friends and family cheered them on.

The former Indian Premier League (IPL) champions posted the video in which the duo can be seen playing cricket as part of a fun session. Neha was seen successfully decoding Varun's mystery with a stylish square-cut off the last delivery.

"Big congratulations to @chakaravarthyvarun and @neha.khedekar from the Knight Riders Family as they begin their journey as husband and wife," KKR captioned the post on Instagram.

After a fantastic stint in the IPL, where he bagged 17 wickets in 13 matches - including a spell of 5/20 vs Delhi Capitals, the best bowling figures by any bowler in the tournament - Varun was picked to play for India in the T20 International series in Australia.

But an unfortunate injury to his right shoulder ruled him out of the tour, and he returned to India from the UAE.

Kolkata Knight Riders Varun Chakravarthy Cricket
Get the latest updates on IPL 2021, IPL Points Table , IPL Schedule 2021 , live score . Like us on Facebook or follow us on Twitter for more sports updates. You can also download the NDTV Cricket app for Android or iOS.