Chasing 274, India A batsmen Kedar Jadhav (78 off 73 balls) and Manoj Tiwary (50 off 75 balls) put India on course. Rishi Dhawan (56) and Akshar Patel (45) played vital knocks towards the end to take India A to a series win at Darwin, Australia. 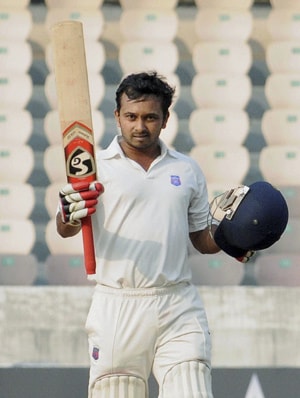 File Photo of Kedar Jadhav who slammed 78 off 73 balls.

Rishi Dhawan (56) and Akshar Patel (45) put up a splendid rearguard action under pressure after Kedar Jadhav (78 off 73 balls) and Manoj Tiwary (50 off 75 balls) laid the platform for India A to clinch the Quadrangular series trophy with a narrow four-wicket win over Australia 'A' in Darwin on Saturday.

Chasing 275, India A were in a spot of bother after losing their top-order for just 51 runs and then reeling at 182 for six but Dhawan and Patel combined for a match-winning 93-run stand for the unbeaten seventh wicket.

Dhawan scored 56 off 55 balls while Patel hit 45 off 38 balls as India A chased the target with just eight balls to spare.

Before that stand, Kedar Jadhav (78 off 73) and Manoj Tiwary (50 off 75) had kept the Indian team in the hunt with their fighting half-centuries before being scalped by Ben Cutting (3/46).

For the hosts, skipper Cameron White smashed his way to a magnificent 137 that set up Australia's challenging total. White and his opening partner Phillip Hughes (51) had rattled up a 146-run stand to provide the hosts a solid start after deciding to bat.

Once Hughes was dismissed by Dhawal Kulkarni (3/51), India kept picking wickets at regular intervals and that helped them restrict Australia to a gettable total. Alex Doolan (24) in the top and Ben Cutting in the lower order batted well for the hosts.

Comments
Topics mentioned in this article
Rishi Dhawan Manoj Tiwary Kedar Jadhav Cricket
Get the latest updates on SA vs IND 2021-22, check out the Schedule and Live Score . Like us on Facebook or follow us on Twitter for more sports updates. You can also download the NDTV Cricket app for Android or iOS.