Josh Hazlewood hopes more IPL exposure with CSK this season will give him insights into the Indian batsmen whom he would face in Tests later this year. 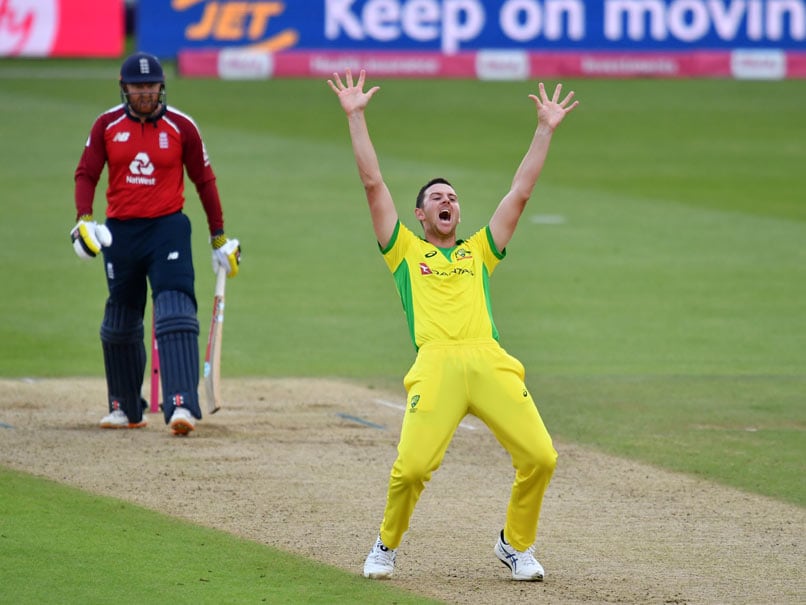 Josh Hazlewood played a T20I for Australia after a gap of four years.© AFP

India and Australia are slated to square off against each other in a four-match Test series later this year. Australia fast bowler Josh Hazlewood said that it would be nice to get some insights as to how the Indian players think ahead of the much-awaited Test series as he hoped to get more opportunities in the Indian Premier League (IPL) with Chennai Super Kings (CSK). "It is going to be interesting playing with a few of the guys who we will come up against this summer. It would be good to get some insights as to how they think about the game; obviously, IPL is a different format," said Hazlewood in a media interaction on Wednesday.

After playing his first T20I after four years for Australia, Hazlewood on Wednesday said that he is hopeful of getting some games for CSK in the upcoming IPL.

Hazlewood had played a T20I for Australia in 2016 against India, and after that the pacer played his next T20I for his side on Tuesday against England.

He returned figures of 1-23 from his four overs as Australia defeated England in the third T20I of the three-match series.

Now, the 29-year-old is hoping to have a good stint with CSK in the upcoming IPL to present a case for himself to be in Australia's T20 World Cup squad next year.

"It was good to be playing T20 cricket again for Australia. It's been a long time that I played T20 cricket for Australia, however, I played few games in the Big Bash last year, I worked on a few things and it seems to be going well," Hazlewood replied to an ANI query.

"Hopefully I will get some games for Chennai this year, I would try to play well for the franchise every time I get an opportunity," he added.

When asked as to how many practice games he would require to be in the right frame of mind for Test matches against India, Hazelwood replied: "I am quite happy with one long-format game (Sheffield Shield), I feel that is enough for me to get myself going and then we can get on with the Test matches."

Traditionally, Australia starts off with their home summer in Brisbane and the side has an impeccable record there.

However, with the situation regarding coronavirus, it is likely that the home summer may start off in Adelaide because of the quarantine protocols.

Commenting on the prospect of starting home summer in Adelaide rather than Brisbane, Hazlewood said: "Obviously, things are out of our control at the moment, we would want our Test summer to begin in Brisbane as we have a tremendous record there.

"We play well there and we tend to get on a roll from there. Adelaide is a great wicket for both bat and ball so I look forward to wherever we start."

Hazlewood would be now be seen in action in the upcoming three-match ODI series against England. After that, he will head over to Dubai to join the CSK camp to take part in the IPL.

The IPL 2020 is slated to be played from September 19 to November 10 in the UAE across three venues – Dubai, Abu Dhabi, and Sharjah.

CSK will play Mumbai Indians in the tournament opener on September 19 in Abu Dhabi.