Jonathan Trott dramatically quit the Ashes tour of Australia last year following the first Test in Brisbane, citing a stress-related illness, and has not played for England since. 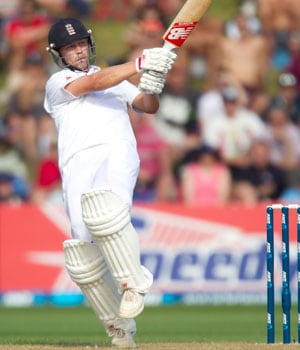 Jonathan Trott, who left England's Ashes tour of Australia in 2013-14 early due to stress-related illness, is hopeful of a return. (File photo)

England batsman Jonathan Trott said Tuesday he was ready for an international recall.

Trott dramatically quit the Ashes tour of Australia last year following the first Test in Brisbane, citing a stress-related illness, and has not played for England since.

However, the 33-year-old South Africa-born right-hander has returned to county duty with Warwickshire, although a recurrence of the illness in April led to another break from cricket.

But since coming back again with the Midlands county in June, Trott has been in fine form for Warwickshire with four centuries -- two each in the County Championship and the 50-over One Day Cup.

However, his time away from the international scene meant Trott was not awarded a central contract by the England and Wales Cricket Board last week.

Nevertheless, Trott told the BBC on Tuesday he had been "available" for England duty for several weeks.

"The ECB and I have had our final get-together. I've been signed off by the ECB," said Trott.

"Whatever comes along with regards to selection, maybe. I'm not putting too much pressure on myself," added Trott, who in 49 Tests has scored 3,763 runs including nine hundreds at an average of 46.75.

"There's been some challenging times. Some tough times. But I've been available a while, for the last month or two, I suppose, in terms of selection and I'm enjoying my cricket.

"I've been feeling good for a while now. It's been great going back to Warwickshire. The last couple of months with Warwickshire have been fantastic."

Yorkshire's Gary Ballance has taken a firm grip on Trott's old number three position in the England Test side but that position has proved far more problematic with regard to one-day internationals, where Trott averages 51.25 in 68 matches.

Trott will be back in the spotlight when Warwickshire face Durham in the One-Day Cup final at Lord's on Saturday.

Victory for Trott's side would see the Birmingham-base club complete a limited overs double following their Twenty20 Blast success, on their Edgbaston home ground, earlier this season.

"I'm doing my best to play as much good cricket as I have got left in me and to win stuff for the team," Trott said.

"We've got a big final on Saturday, then another game against Durham, which is important, which we may have to win to stay second (in the Championship)."

Comments
Topics mentioned in this article
England Cricket Team Jonathan Trott Cricket
Get the latest updates on India vs Australia Series, check out the India vs Australia Schedule for 2020-21 and Ind vs Aus live score . Like us on Facebook or follow us on Twitter for more sports updates. You can also download the NDTV Cricket app for Android or iOS.