Jasprit Bumrah goes on to say that Rohit Sharma's daughter Samaira does Bumrah's action better than the bowler himself. 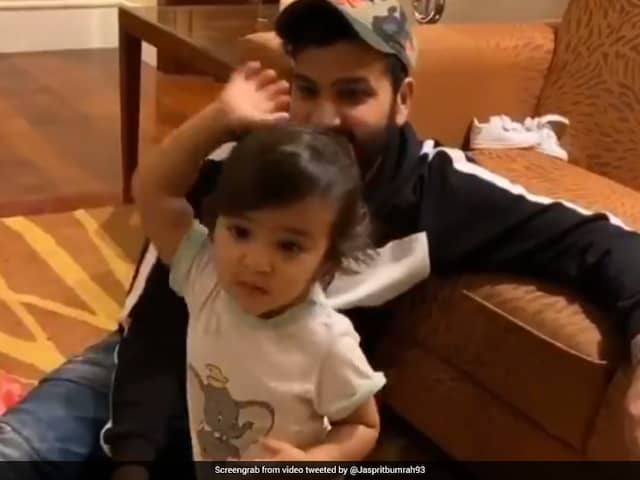 Jasprit Bumrah and Rohit Sharma play together for India and Mumbai Indians.© Twitter

Jasprit Bumrah, the Indian fast bowler, has been active on social media as India is in the middle of a 21-day lockdown in the fight against coronavirus. Bumrah has kept his fans engaged by constantly sharing interesting posts on social media. In his recent Twitter post, Jasprit Bumrah shared an adorable video of Rohit Sharma's daughter Samaira where she can be seen trying to copy his action. Bumrah captioned the tweet saying, "I think she does it better than me @ImRo45 and @ritssajdeh! I can safely say I am a bigger fan of hers than she is of mine.

I think she does it better than me @ImRo45 @ritssajdeh!I can safely say I am a bigger fan of hers than she is of me. ???? pic.twitter.com/rHP5g52e20

Rohit Sharma and Jasprit Bumrah were involved in an Instagram live session a few days back. During the chat, Sharma and Bumrah discussed different topics. Bumrah shared with the Indian vice-captain that he really likes Swedish footballer Zlatan Ibrahimovic.

The Indian fast bowler felt that there is a similarity between him and Ibrahimovic as both players were not taken seriously during the beginning of their careers. However, they proved many people wrong later. To this, Rohit Sharma agreed with Bumrah and told him that he is a great player.

About the IPL, there has not been any official announcement from the Board of Control for Cricket in India and as of now, it is scheduled to begin from April 15, 2020.

However, with global sporting events from around the world getting cancelled or postponed it is possible that the BCCI takes a similar route like the French Open or the Wimbledon. But fans will have to wait for an official statement from them.