Jasprit Bumrah has picked up 5 five-wicket hauls from 12 appearances in Test cricket. 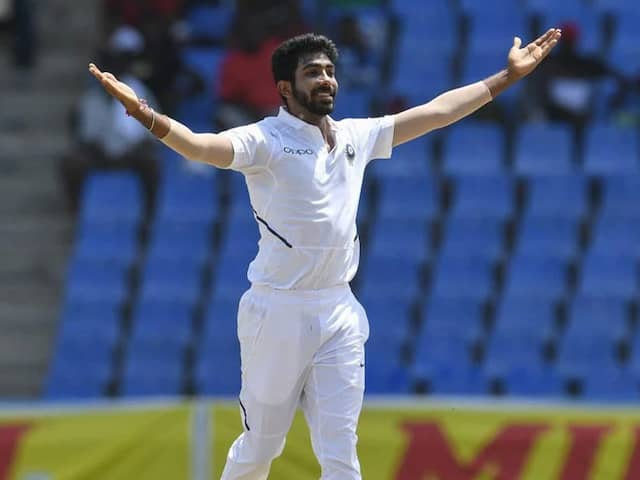 Jasprit Bumrah has left his mark early in Tests.© AFP

Jasprit Bumrah replicated his limited-overs success in the recently concluded Test series against the West Indies. India's pace spearhead Jasprit Bumrah picked up 13 wickets in the two-Test series, including a hat-trick. In merely 12 Tests, Jasprit Bumrah has picked five-wicket hauls five times, but one moment that stands out for him, was his first "fifer" in the longest format of the game. Bumrah revealed, after picking his first five-wicket haul in Johannesburg, he was ecstatic and felt no one can snatch it away from him.

"For me, Test matches was a big thing, so getting my first Test fifer (five-wicket haul), which I got in Johannesburg playing in my first series... so I was happy and then the moment I got my fifth wicket (I was like), now I have got a Test fifer and no one can take it away from me and that was the best moment of my Test career," Bumrah said.

Branded a limited-overs specialist at the beginning of his career, Bumrah said it was nothing short of a dream come true when he made the Test side as success in the longest format is what he has always craved for.

"I had the belief that I have done well in first-class cricket, then I could replicate that in Test matches. The journey has just started, just played 12 Tests...when I made my Test debut in South Africa after playing two years of international cricket, it was a dream come true (moment).

"Being there playing in the white jersey was a great feeling and then slowly contributing to team success gave me satisfaction," the pacer, who became the third Indian to pick a hat-trick in Test cricket added.

While Bumrah has been rested for the T20I series against South Africa, he will return for the three-Test series against the Proteas beginning with the opening match at Visakhapatnam on October 2.