Anderson was one of several key players left out of the England squad for the forthcoming five-match one-day international series against Australia. 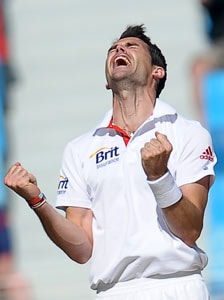 James Anderson doesn't like taking a break from England matches but admitted on Monday that it is in his best interests to stand aside from international duty before the return Ashes series in Australia.

Anderson was one of several key players from the England side that recently wrapped up a 3-0 Ashes series win on home soil to be left out of the squad for the forthcoming five-match one-day international series against Australia.

England begin preparations for their latest encounter against Australia with a one-day international away to Ireland on Tuesday where they will be without regular captain Alastair Cook, fellow top-order batsman Ian Bell, seamers Anderson and Stuart Broad as well as first-choice spinner Graeme Swann.

Former England captain Michael Vaughan has called for spectators who bought tickets in advance to receive something of a refund given England are resting so many star names ahead of the return Ashes, which start with the first Test in Brisbane in November.

But the 31-year-old Anderson, while eager to lead England's attack whenever he can, is also thankful for a break after a gruelling Test series against Australia.

"An Ashes series is emotionally and physically draining -- you do feel it," he said on Monday at a sponsor's event.

"There are not many five-Test series any more and with a couple of back-to-back Tests in there as well you feel the aches and pains and it takes a lot out of you emotionally," added Anderson, who during the course of the Ashes moved into second place behind Ian Botham in England's all-time list of leading Test wicket-takers.

"It gets to a point where you just want to let things soak in, take everything in and have a rest.

"Cricketers don't like missing cricket no matter what form of the game -- it is quite frustrating to miss cricket.

"But there is a window here for the guys that have been left out to get a good rest and prepare for a tough winter."

And the fact his fellow seamer Tim Bresnan missed the fifth and final Test at The Oval with a back injury meant Anderson understood exactly why he was being spared one-day duty against Australia.

"We've got a huge winter ahead of us," he said.

"I'm sure the selectors considered all there options with Tim Bresnan being injured we can't really afford any more of our seamers getting hurt.

"I think that is why Stuart and I have been rested. Graeme Swann has obviously bowled a lot of overs this summer and with his recent injury problems with his elbow I think it is probably right to give him a rest.

"The way it is right now that is in our best interests."

Comments
Topics mentioned in this article
Cricket Graeme Swann Sreesanth Stuart Broad Alastair Cook Tim Bresnan Ian Bell James Anderson England Cricket Team
Get the latest updates on SA vs IND 2021-22, check out the Schedule and Live Score . Like us on Facebook or follow us on Twitter for more sports updates. You can also download the NDTV Cricket app for Android or iOS.