Sachin Tendulkar the Only One Ahead of Jacques Kallis in Numbers, Says Rahul Dravid

Jacques Kallis retired from Test cricket after the series against India in December 2013. South Africa won the two-match series 1-0. 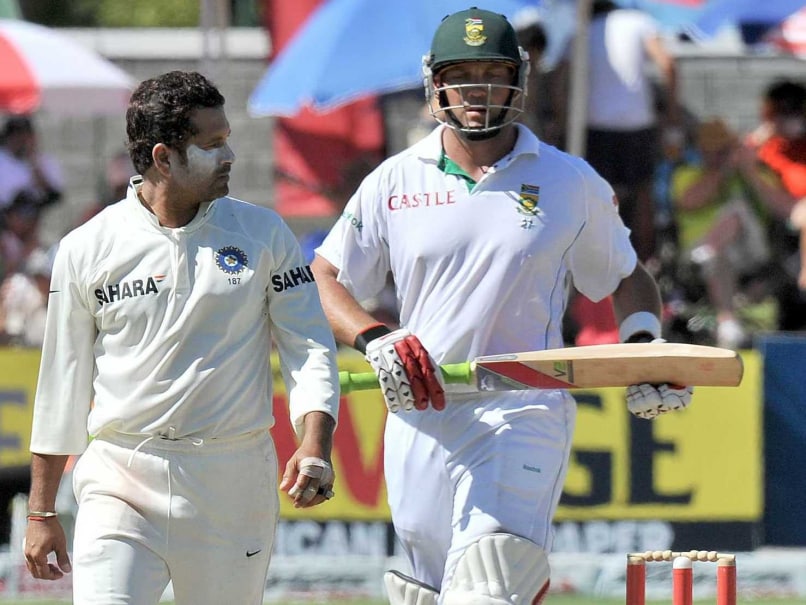 Sachin Tendulkar looks on as Jacques Kallis takes a single in the third Test between India and South Africa in January 2011.© AFP
New Delhi:

"I think he's (Kallis) going to end up with some really record-breaking numbers. I think he'll probably be second only to Tendulkar's numbers overall if you look at it," Dravid said on "Modern Masters", a new video series on a cricket website.

"He seems pretty fit in spite of his workload. The fascinating thing is the number of injuries. He's hardly had any major injuries considering he bats, he bowls. It's almost unheard of and he looks like he can go on for a while," Dravid said about the 38-year-old, who is currently in Sri Lanka for the limited overs series.

The cricket aficionados were spoilt for choice during the last two decades due to some of the greatest batsmen like Tendulkar, Brian Lara, Ricky Ponting, who graced the game during the period. But Dravid feels that by "sheer weight of his runs" -- 13289 in Tests and 11574 in ODIs -- Kallis makes everyone sit up and take notice of his stupendous achievements.

"For the longest time, we've been spoilt with the quality of batsmanship with people like Tendulkar, Lara, and Ponting who have played in the same era as Kallis. In some ways he has had to earn this right of approval by sheer weight of runs, sheer consistency of performance and by building up a record that is second to none and is probably going to surpass a lot of these greats. He's forced you to sit up and take notice," Dravid told Sanjay Manjrekar in the newly started video series. (Kallis Beats Sachin, Ponting to Perfect Farewell)

A technician-par-excellence himself, Dravid also dissected Kallis' batting technique. "He has a little bit of an initial movement, a two-step movement. It is quite unique in some ways to South Africa. But the important thing to note is that even though he makes that initial movement or that initial shuffle of his, after that he is in a really good balanced position to go fully back or go forward as well when the ball is pitched (up).

"He has the ability to judge the line exceptionally well and leave well," said Dravid.

Having shared the dressing room with Kallis while playing for the Royal Challengers Bangalore in the Indian Premier League, Dravid said he was impressed with Kallis' calm and composed nature.

"One of the things I noticed with Kallis, and I played with him for three years with RCB at the IPL, was just how calm and relaxed he is and how unflustered he gets irrespective of what's happening around him. "Whether he has scored runs or whether he has failed, his behaviour or his mannerisms never change. Sometimes you think he has almost no emotion at all but that's not the case. He's just able to maintain that calm balance without going up and down too much," he revealed.

Dravid was clear in his assessment that South Africa will find it virtually impossible to find his suitable replacement. "I think he's going to be even more respected and revered once he leaves, because then it's going to be virtually impossible to find a replacement for that kind of cricketer who bats in your top four, bowls a very heavy ball, takes wickets, catches in the slips. He does it all! We're going to start appreciating and recognising him a lot more once he leaves," said Dravid.

Comments
Topics mentioned in this article
Jacques Kallis Rahul Dravid Sachin Ramesh Tendulkar Cricket
Get the latest updates on ICC Women's Cricket World Cup 2022 and IPL 2022, check out the Schedule , Live Score and IPL Points Table. Like us on Facebook or follow us on Twitter for more sports updates. You can also download the NDTV Cricket app for Android or iOS.