Ireland and Afghanistan served up a blistering classic in the final of the World Twenty20 Qualifier in Dubai, putting to rest any fears that the game would be an anti-climax after both teams had already sealed their spot in the World Twenty20 to be held later this year. 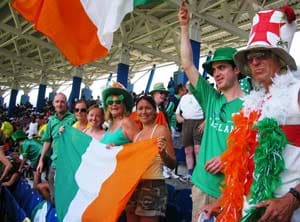 Ireland and Afghanistan served up a blistering classic in the final of the World Twenty20 Qualifier in Dubai, putting to rest any fears that the game would be an anti-climax after both teams had already sealed their spot in the World Twenty20 to be held later this year.

The game was adorned by brilliant innings from two pugnacious batsmen, Mohammad Shahzad and Paul Stirling. Shahzad cut loose at the bowling, crashing 77 off 57 balls as he finally found a way to overcome Ireland's grip. Shahzad, the match-winner in this event two years ago, with an unbeaten 65 then, infuriated the Irish attack who responded with long hops that he deposited over the ropes.

Boyd Rankin's first ball was hit for six by Karim Sadiq, but Rankin responded with an angry spell, dismissing Sadiq, who was bowled after the ball crashed into his helmet and rolled onto the stumps. Trent Johnston also got some early stick but had the other opener Javed Ahmadi held at third man.

The middle-order batsmen missed their way, but Shahzad ensured a platform which Gulbodin Naib* built on with two sixes off the last two balls.

Dawlat Zadran bowled William Porterfield first ball, but that had reassuring echoes of the win over England in Bangalore and Irish fans saw it as an omen. Ed Joyce played some gorgeous shots before he chipped to midwicket.

Stirling continued to flay the ball to all parts, making the second-fastest half-century in Twenty20 internationals, off just 17 balls, only behind Yuvraj Singh's 12 balls of mayhem against England in 2007. His 357 runs, at an average of 44.62, was the best of the tournament. He played some audacious shots, notably a front-front hit for six over third man. Ireland had a couple more hiccups, when Kevin O'Brien was out the ball following Stirling's dismissal. Wilson fell for 32 with three runs needed, but Andrew Poynter kept his head and the trophy was secured with seven balls to spare.

Qualifying for the World Twenty20 in Sri Lanka was the main aim for Ireland here, but with the ICC offices less than 200 metres away, they took the opportunity to show how far they are ahead of their fellow Associates, against whom they have won 30 out of their last 33 games, two of the defeats by four runs. Ireland will be grouped with Australia and West Indies in the World Twenty20 in September.

Ireland are perhaps too strong at their current level but what the ICC needs to be convinced of is if they can compete at the top tier. The recently-articulated ambition of playing Tests can only be achieved with regular wins over Full members.

This campaign started with defeat to seventh-ranked Namibia, but Ireland often start slowly. Needing to win nine games in a row to qualify, they achieved their goal with little drama barring one tight game against Italy.

That meant fringe players needed to step up, and Phil Simmons can have no complaints on that score. Gary Wilson had a brilliant run with the bat and kept wickets tidily, but it was the array of bowling talent that ensured Ireland's passage, even with the loss of Cusack and Mooney.

Johnston and Rankin could always be relied upon to make an early breakthrough, five times taking a first-over wicket. Rankin has improved since joining the England set-up and there are real concerns that he might win a national call-up there. Johnston has spent much of the past year nursing his knee, and the eventual operation left him on crutches for the winter. But he improved as the event progressed and his match-winning dismissal of the two top Namibians yesterday crowned his tournament, likely to be his last at Associate level.

But before that, he has one last hit at the big boys, and will relish taking on the land of his birth (Australia).