Shah Rukh Khan's Indian Premier League (IPL) franchise Kolkata Knight Riders (KKR) won the title in 2012 and they have again reached the finals of the seventh edition being played here on Sunday. The superstar admits to being nervous, but says he has nothing to lose and tweeted a picture with AbRam written on it. His team eventually won the match against Punjab by three wickets to lift their second IPL title in three years. (IPL 2014 Final Scorecard) "As long as I will do justice to that moment in which I exist, I have nothing to fear. The rest does not matter," tweeted SRK before the match. 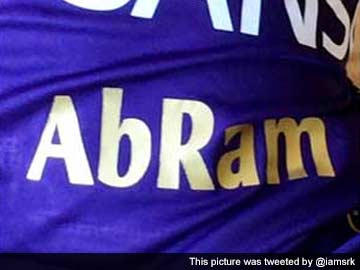 But he is nervous about the result.

"I am getting a feeling that my constant tweeting is a sign of nervous excitement. Fingers are not stopping," added SRK whose daughter Suhana is with him at the M. Chinnaswamy stadium.

The "Main Hoon Na" star has three children -- son Aryan, daughter Suhana with wife Gauri, and baby boy AbRam, who was born through surrogacy in 2013.

While his daughter and her friends are all up to watch the match live here, his other family members are back home in Mumbai.

"We are kind of ready in all shapes and sizes. Bring it on. Go my KKR," Shah Rukh shared along with a photograph with AbRam's name written on it, but it is not clear whether its a jersey or a T-shirt.

"Suddenly, wish for all around me. Wife is babysitting lil one, miss her. Aryan in school. But my army of lil girls with me. Ready steady po," he further tweeted.

"Two hearts racing. My KKR & mine. They say when two hearts race... both win. So let's wish for more and dream a little higher. Love you, my boys," he wrote.