The Pune Warriors India are all set to release burly New Zealand batsman Jesse Ryder who now goes back to the auction pool while Delhi Daredevils will also release a few of their foreign recruits from last season including Ranji Trophy's highest run-scorer Robin Bist. 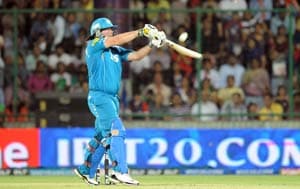 The Pune Warriors India are all set to release burly New Zealand batsman Jesse Ryder who now goes back to the auction pool while Delhi Daredevils will also release a few of their foreign recruits from last season including Ranji Trophy's highest run-scorer Robin Bist.

Most of the franchises are keeping cards close to their chest and are set to retain all the big names.

Bist, who has been a part of Daredevils set-up but hasn't got a single game has always been earmarked as a man for the longer version.

While youngsters like Yogesh Nagar, Puneet Bisht, Shahbaz Nadeem and Manpreet Juneja were the additional four players apart from the squad of 15 who went to South Africa for the Champions League Twenty20, Robin's omission from the touring party was a clear indication about what the management feels about him.

South African opener Ghulam Bodi and Australian all-rounder Glenn Maxwell, both of whom joined as replacements will go back to the auction pool along with New Zealand pacer Doug Bracewell who is unlikely to find a place with likes of Morne Morkel, Umesh Yadav, Irfan Pathan and Ajit Agarkar already there.

Sourav Ganguly has already declared that he won't play in IPL 6. Ryder didn't do too badly during Pune Warriors' disastrous campaign last year but he hasn't played a single competitive match after the last edition of IPL.

"He hasn't been playing much cricket so at this point it doesn't make sense to include him," an insider stated.

The high profile Mumbai Indians side will also like to reduce a bit of flab as far as their foreign recruits are concerned.

While the likes of Kieron Pollard, Lasith Malinga, Dwayne Smith, Mitchell Johnson, James Franklin, Richard Levi are certainties to be retained, the axe might fall on the fringe foreign players like Clint McKay, Aiden Blizzard and Davey Jacobs to name a few.

Dropping a few of these foreign recruits would ideally give MI a chance to buy some quality domestic players depending on their performance which will be tracked by former India pacer Paras Mhambrey who travels across the length and breadth of the country in search of quality Indian performers.

Comments
Topics mentioned in this article
Pune Warriors India Cricket Delhi Daredevils Parthiv Patel Umesh Yadav Hrishikesh Hemant Kanitkar Robin Bist Jesse Ryder
Get the latest updates on IPL 2020, check out the IPL Schedule for 2020 and Indian Premier League (IPL) Cricket live score . Like us on Facebook or follow us on Twitter for more sports updates. You can also download the NDTV Cricket app for Android or iOS.