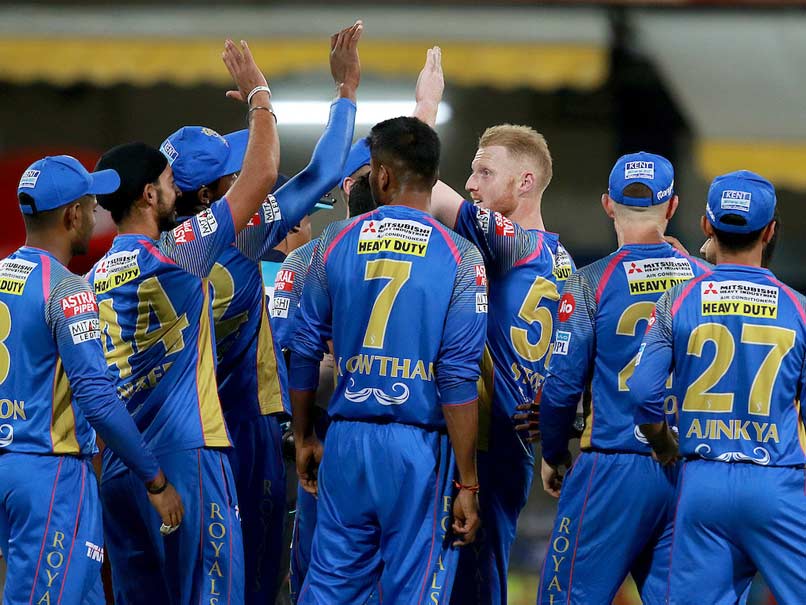 KL Rahul smashed a classy unbeaten half-century after young off-spinner Mujeeb Ur Rahman's exploits with the ball to guide Kings XI Punjab to a comfortable six wicket win over laggards Rajasthan Royals in an Indian Premier League match on Sunday. Chasing a modest 153 run target, Rahul anchored Kings XI's innings from start to finish, scoring 84 off just 54 balls with the help of seven boundaries and three sixes to guide his side home with eight balls to spare. Kings XI's chase, however, started on a bad note as they lost dangerous Chris Gayle (8) and Mayank Agarwal (2) in successive overs. While Gayle cut Jofra Archer straight to Sanju Samson at point in the fourth over, Agarwal pulled a short delivery from Ben Stokes to Rahul Tripathi at long leg. Then Rahul and Karun Nair (31) shared a 50-run stand for the third wicket off just 37 balls to stabilise Kings XI's chase before the latter dragged Anureet Singh's short delivery back onto his stumps as Kings XI were reduced to 79 for three.

Teenaged Afghanistan off-spinner Mujeeb Ur Rahman continued his impressive performance as his three wickets helped Kings XI Punjab restrict Rajasthan Royals to 152/9 in an Indian Premier League (IPL) match. After a 49-run third-wicket stand between Jos Buttler (51) and Sanju Samson (28), Mujeeb picked the Englishman, his compatriot Ben Stokes (12) and Jofra Archer (0) in his second two-over spell to derail the Rajasthan innings. Mujeeb, 17, has now taken 12 wickets and is currently fifth in the list of most wicket-takers. The teenager not only took wickets but also proved to be economical right from his first two-over spell which put pressure on the Rajasthan top-order at the Holkar Cricket Stadium. After being asked to bat, Rajasthan rode on Buttler to get their runs, even if fellow opener D'Arcy Short (2) and Ajinkya Rahane (5) were dismissed with 35 on board for the western outfit in four overs. While captain and off-spinner Ravichandran Ashwin accounted for Short -- who was caught by Andrew Tye at midwicket -- Rahane's cut off a delivery from left-arm spinner Axar Patel saw Chris Gayle dive forward to pull off a stunning catch. Then Buttler and Samson put together an important partnership to lay a foundation for the flourish in the final 10 overs. But when all seemed to be going good, Samson pulled medium pacer Tye straight into the hands of Karun Nair in the fifth ball of the 11th over. Following the wicket, Rajasthan lost track as Mujeeb removed Stokes (12) and Buttler in the 13th and 15th overs respectively. Mujeeb struck for the second time in the 15th over to get rid of Jofra Archer (0) to reduce the visitors to 106/6.

Kings XI Punjab (KXIP) will aim to bounce back to their winning ways when they take on bottom-placed Rajasthan Royals (RR) at the Holkar Cricket Stadium. While Punjab are placed fourth with five wins and three defeats and 10 points, the Ajinkya Rahane-led Rajasthan languishes at the bottom of the league points-table with just three wins from eight games. With just six points in their kitty, Rajasthan are in a must-win situation with the league just about past the midway point. Although both teams have suffered two straight defeats each, Punjab have a better chance to book a play-off berth. Punjab's batting mostly relies on opener Chris Gayle, who has accumulated 302 runs from just five games, averaging 100.66. Even in their last encounter against Mumbai Indians on Friday, when most of the Punjab batters failed to go big, the self-proclaimed 'Universe Boss' slammed a 40-ball 50, laced with six boundaries and couple of sixes. In-form opener Lokesh Rahul, who faultered in the game against Mumbai, has been in good form, amassing 292 runs from eight games. The Punjab openers have been a major reason behind their success as the duo have handed a perfect start to their side on several occassions in this year's edition. Karun Nair has also been impressive after 209 runs from seven innings but veteran Yuvraj Singh, Aaron Finch and Mayank Agarwal are yet to make their presence felt in the middle-order. The trio's poor form could be a cause of concern for the team management and this is high time for them to come out with their best. In the bowling department, skipper Ravichandran Ashwin, along with medium-pacer Mohit Sharma add depth to the line-up. Also, pacers Barinder Sran and Andrew Tye, and Afghan spinner Mujeeb ur Rahman shoulder the bulk of the responsibility. While Australian Tye has 10 wickets from eight games with an economy of 7.90, pacer Ankit Rajpoot and Mujeeb Ur Rahman have seven and nine wickets each. (SCORECARD)

22:53 IST:Axar tried to play the length ball but it was grabbed inside the boundary

22:45 IST:Karun Nair tried to fetch a pull from way outside off and gets an under-edge onto the stumps.

22:25 IST: Rajasthan Royals have been able to keep Kings XI Punjab's scoring rate under control as 50 comes up in the 8th over. Kings XI Punjab need 103 runs in 72 balls

21:58 IST: A disciplined over from Jofra Archer gives away just 5 runs.

21:50 IST: Rahul and Gayle come out to begin the chase of 153. Gowtham will open the attack

21:15 IST: It was a googly that lands right on a length that clattered into Jofra Archer's stumps

21:06 IST: It was a carrom ball from Mujeeb and Jos Buttler produced an edge.

21:00 IST: Jos Buttler brings up back to back fifties

20:55 IST: Mayank grabbed it at long-off but threw the ball over to Tiwary at long-on.

20:50 IST: Gets it to rise up but Samson chooses to swing his arms and sends the ball right down to the deep square leg.

20:30 IST: Jos Buttler survives a scary review. Sanju Samson hits a flat six over the deep mid-wicket to bring up fifty for RR in the 7th over.

20:25 IST: Exceptional over from Axar Patel, just 3 runs off it RR have slowed down after losing 2 early wickets.

20:13 IST:Another good over for Rajasthan Royals, 9 overs off it.

20:07 IST: Although D Arcy Short departed after playing a careless shot, Jos Buttler looks in excellent touch. Gets 4 boundaries in Ankit Rajpoot's over.

20:03 IST:Poor shot from D Arcy Short. Short expected the ball to come on the bat but it took the outside of the bat as Andrew Tye grabbed it at the midwicket.

20:00 IST: Jos Buttler and D'Arcy Short walk out to bat for Rajasthan Royals, R Ashwin to begin the attack for Kings XI Punjab

On the other hand, Rajasthan Royals have experienced a topsy-turvy campaign so far. With the IPL entering its business end, skipper Rahane will expect his team to get their act together and aim for consistency. In their previous match, Rajasthan fell short against Delhi Daredevils by just four runs in a rain-affected tie. Rahane and Samson have been their best batsmen this season but inconsistent run of Ben Stokes and Jos Butler has affected their performance this season. Among the bowlers, young seamer Jofra Archer have done well to claim seven wickets from just three matches while this IPL's costliest buy Jaydev Unadkat have also been amongst the wickets. Rajasthan's main concern will be the form of their spinners -- Shreyas Gopal and K. Gowtham -- who have so far failed to hunt as a pair. While Gopal has six wickets from seven games, Gowtham has bagged five wickets from eight matches. Rajasthan couldn't afford another defeat from here as it would almost crush their dream of a play-off berth.