IPL 2021: Taking to Instagram, Mohammed Azharuddeen posted a photo of Virat Kohli autographing a jersey for him. 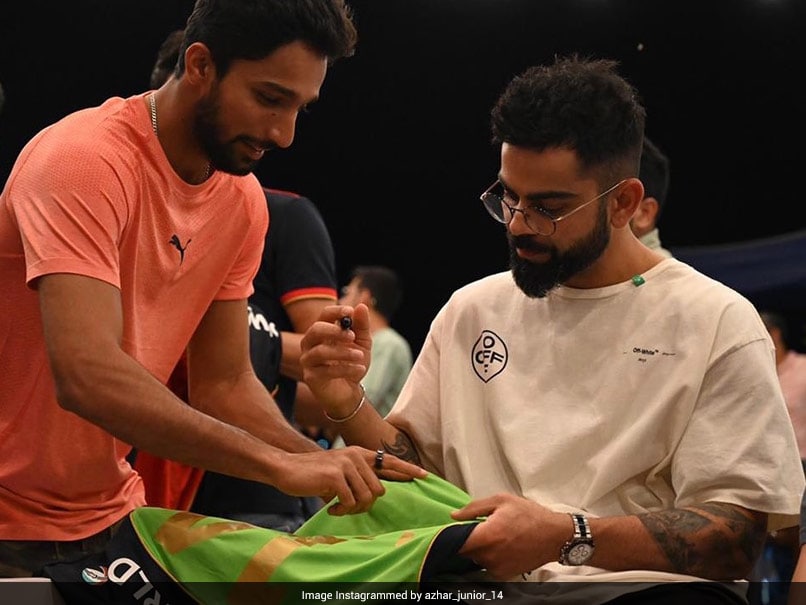 Mohammed Azharuddeen gets a jersey autographed by Virat Kohli.© Instagram

Royal Challengers Bangalore (RCB) youngster Mohammed Azharuddeen took to social media to post a photo with skipper Virat Kohli. In the photo, which was posted on Instagram, the India captain can be seen signing an autograph on a jersey for the 27-year-old. In his post, Azharuddeen also revealed that he is going "to get this jersey framed". Azharudden is known to be a fan of Virat Kohli, and had also earlier posted a photo with the RCB captain and his wife Anushka Sharma.

Azharuddeen was roped in by RCB during the Indian Premier League (IPL) 2021 Player Auction in February. His debut season in the franchise tournament was cut short due to rising COVID-19 cases in India.

IPL 2021 began on April 9 and was postponed on May 4, after the tournament also saw a rise in cases.

Despite having performed well in the 2021 edition of the Syed Mushtaq Ali Trophy, Azharuddeen did not feature in any matches for RCB in IPL 2021.

He is known for smashing the second-fastest ton in Syed Mushtaq Ali Trophy history, which he reached in 37 balls.

Virat Kohli Mohammed Azharuddeen IPL 2021 Cricket
Get the latest updates on SA vs IND 2021-22, check out the Schedule and Live Score . Like us on Facebook or follow us on Twitter for more sports updates. You can also download the NDTV Cricket app for Android or iOS.