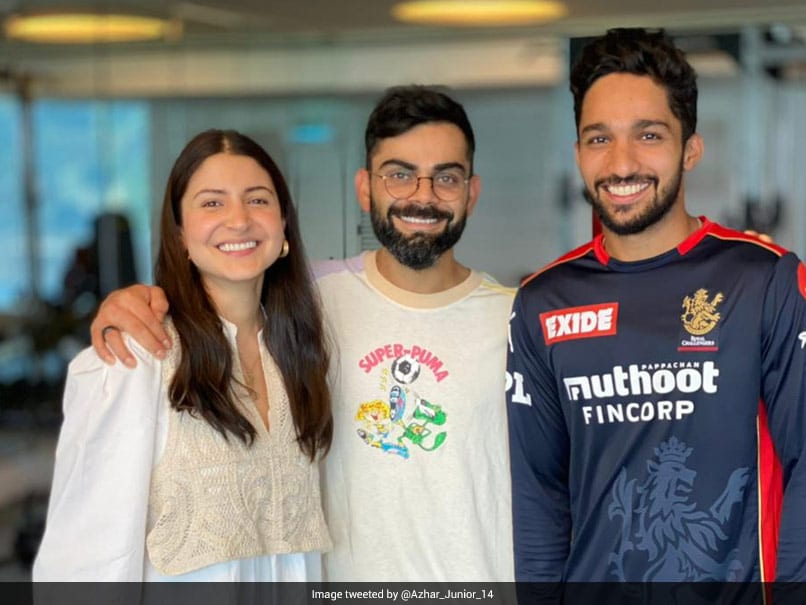 Kerala opener Mohammed Azharuddeen netted his first gig in the Indian Premier League (IPL) gig in ahead of the 2021 season after impressing in the Syed Mushtaq Ali Trophy. He was picked up for Rs 20 lakh in the auction ahead of IPL 2021 by Royal Challengers Bangalore (RCB) and he had revealed his excitement to play under Virat Kohli's captaincy earlier. On Thursday, ahead of RCB's match against Rajasthan Royals, Azharuddeen took to Twitter to share a picture with Kohli and his wife Anushka Sharma.

"So happy to be amongst such humble, down to earth people," he captioned the picture, tagging the couple.

So happy to be amongst such humble, down to earth people @AnushkaSharma @imVkohli pic.twitter.com/MmDPKbiaLw

In the last season of the Syed Mushtaq Ali Trophy, Azharuddeen smashed the second-fastest century in the history of the tournament - missing out on Rishabh Pant's record of the fastest ton by just five deliveries - while chasing 197 against a formidable Mumbai bowling attack.

He reached the landmark in just 37 deliveries, and finished unbeaten on 137 off 54 deliveries as his team comfortably won the match. The 26-year-old hit nine boundaries and 11 sixes in his devastating knock.

Azharuddeen is yet to play for RCB this season.

The Kohli-led team has won all three of their matches so far. After edging two close contests against Mumbai Indians and SunRisers Hyderabad, RCB romped to victory in their third game against Kolkata Knight Riders.

The team moved base to Mumbai for their next leg of the tournament.

On Thursday, they take on Rajasthan Royals as they look to continue their winning momentum.

Virat Kohli Mohammed Azharuddeen Cricket
Get the latest updates on ICC Women's Cricket World Cup 2022 and IPL 2022, check out the Schedule , Live Score and IPL Points Table. Like us on Facebook or follow us on Twitter for more sports updates. You can also download the NDTV Cricket app for Android or iOS.