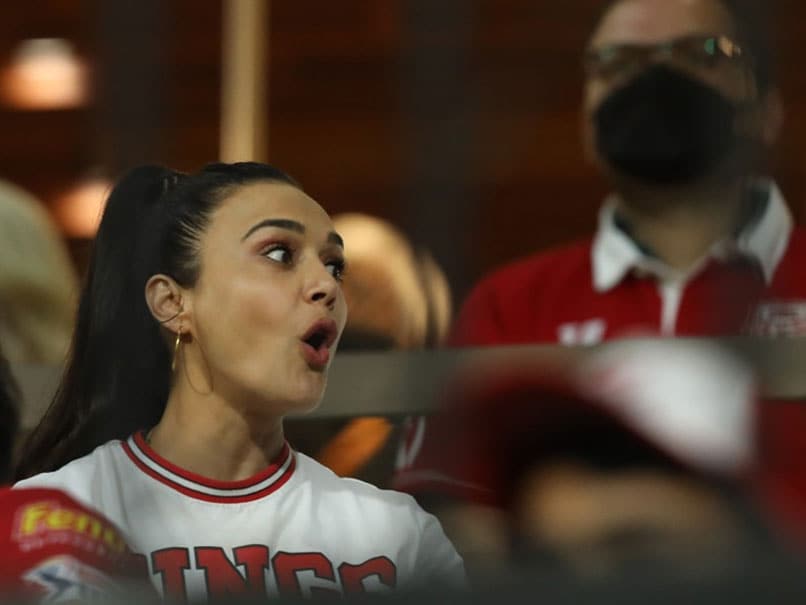 Preity Zinta has been a regular presence at Kings XI Punjab's matches this IPL.© BCCI/IPL

With a resounding win over Kolkata Knight Riders on Monday, courtesy half-centuries from Mandeep Singh and Chris Gayle, Kings XI Punjab moved into the top four on the Indian Premier League (IPL) 2020 points table. Preity Zinta, co-owner of the team, celebrated the win with Gayle and Mandeep in a video session. Evidently Zinta was thrilled with the win and was inquisitive about what were Gayle and Mandeep telling each other on the field during their 100-run partnership against KKR. Gayle and Mandeep answered her queries at length and Mandeep reiterated his wish that Gayle “should never retire.”

The Universe Boss is probably the most entertaining person. Watch @mandeeps12 & me in conversation with him post the game. Also do check out "Groove" on YouTube. I promise U will love it. @henrygayle #Ipl2020 #dream11ipl #pzipldiaries #Saddapunjab @lionsdenkxip pic.twitter.com/CBQnn0igo6

Zinta also paid her respect to Mandeep, who turned out to play for KXIP only two days after the death of his father. The right-handed batsman had also played for the team on the day his father had died back home in Chandigarh last Saturday.

“Huge respect to Mandy for an incredible performance last night after all that he has been through with his father. We are all so proud of him,” wrote Zinta on Twitter.

She also praised Gayle's singing talents and the trio rocked to the tunes of his song.

Chasing 150, Gayle came in to bat at No. 3 and tore into the KKR bowling, smashing 51 runs off just 29 balls with five sixes and two fours.

Mandeep, at the other end, took his time and played the anchor. He finished unbeaten 66 off 56 balls with eight fours and two sixes as KXIP registered their fifth win in succession and made the top four from being a bottom-placed team.

KXIP next play Rajasthan Royals in Abu Dhabi on Friday.

Mandeep Singh IPL 2020 Kolkata Knight Riders vs Kings XI Punjab, Match 46 Cricket
Get the latest updates on India vs South Africa and check out  Schedule, Results and Live Score. Like us on Facebook or follow us on Twitter for more sports updates. You can also download the NDTV Cricket app for Android or iOS.